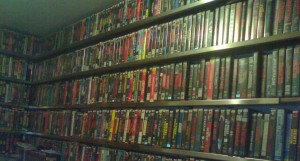 TONIGHT’S EPISODE: ROB SCHNEIDER IS JUST AS ANNOYING AS AN ANIMAL AS HE IS AS A MAN

“Saturday Night Live” movies are notoriously bad. For every Blues Brothers, we get a thousand Corky Romanos. Rob Schneider was only marginally entertaining as an SNL cast member (“Makin’ copies…”), but he scored major points for cronyism when several of his fellow cast members went on to bigger and better things (Adam Sandler, Chris Farley, Mike Myers, and David Spade among them), and invited him along for the ride. After seeing his bit parts in the films of such notables, someone decided that Schneider deserved a shot at a starring role. The resulting mess, Deuce Bigelow: Male Gigolo, was so bad that Schneider was relegated back to minor roles for a few more years. When he re-emerged, once again ready for the spotlight, he gave us this P.O.S.

The Animal is a wretched hunk of trash with absolutely no redeeming qualities. After an accident, a mild-mannered police officer is healed by a mad scientist who infuses him with animal DNA, endowing him with the attributes of said animals. Naturally, he becomes a super cop, much to the chagrin of his commanding officer who, in a twist so transparent you can see it coming in the first 15 minutes of the film, is actually a bad guy. Yuck. Just yuck.

Rob Lowe stars in this dull and dopey action flick about a man (serving time for vehicular manslaughter) who uncovers a conspiracy of murder at the local prison. He escapes and sets out to expose the perpetrators, one of whom is the Warden himself. I’ve never been a fan of Lowe and he did little with this role to change my mind. The writing in this film is completely nonsensical and unrealistic. You simply won’t be able to sustain your disbelief long enough to see the end of this crapfest. The whole affair has the feel of a half-finished screenplay from the ‘70s filmed (with a heavy hand) thirty years too late. The lighting is horrid, making everything look pale and washed out. The sets are cheap, and the action sequences are filmed in that “too close” style preferred by those who aren’t comfortable directing action sequences. Director Ziehl went on to create several forgettable remakes and sequels before his career petered out.

D.L. Hughley, Bill Bellamy, and a cast of forgettables navigate life and love in the big city of Los Angeles in this male version of Waiting to Exhale. Wry and funny, but not in a laugh-out-loud kinda way. The characters are too broadly drawn, every last one a transparent stereotype. The dialogue is crisp and believable, however, and the direction (by novelist Gary Hardwick) is swift. The major problem with this movie is that it hasn’t aged well. Sadly, few comedies do. If you don’t believe me, head over to Hulu.com, Crackle.com, or the On Demand channel on your cable or satellite and peruse the “Free Comedy” section.

Danger Brown spends his days searching the planet for that most elusive of prey, the videotape. He is addicted to Bull Moose Music’s 30¢ VHS rack.