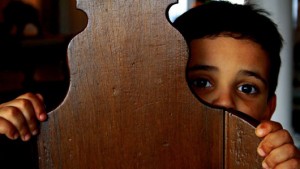 Maybe it’s because I’m a 37-Year-Old man-boy, but I love a movie told from the perspective of a confused and frightened child. When done properly, these films play deftly on the primal fears that each of us experience as we navigate the uncertainty of this world into which we are all unwillingly thrust at birth. Tonight, I take a look at three creepy and surreal films which feature a child as both filter and silent narrator.

Here’s a moody, little thriller that rewards multiple viewings. Young Lucas is slowly going blind due to a genetic disorder which he inherited from his mother…but that’s the least of his worries. Seems there’s a serial killer on the loose who targets attractive, sightless women; women like Luke’s mom and the gals in her sewing circle. The precocious Lucas becomes hyper-aware of his surroundings, keeping his ever-worsening eyes peeled for clues as to who this nefarious slasher might be and when or where he may next strike. There’s just one problem; Lucas isn’t quite “all there.” Between the growing darkness (both literal and metaphorical), and his wild imagination (fueled by Spider-Man comic books), our young hero plays closer to Leonard Shelby from Memento than he does to Encyclopedia Brown. It all comes to a head when Lucas’ new baby sister is born. Are his homicidal urges towards the infant in fact born from a desire to protect her from inevitable future blindness (and hence, the ripper’s blade), or is he just a little nut job? Director Mark Peploe (who won an Academy Award for his screenplay, The Last Emperor) plays fast and loose with definitives here, but the film operates on an inner logic all its own, so answers are plentiful for those who look closely. I thoroughly enjoyed the fractured narrative structure employed here. Revisiting scenes from earlier in the film and having several of the actors play multiple roles, in my opinion, only serves to underscore the pie-eyed confusion of our humble avatar. Visual metaphors meant to dig at the differences between looking and seeing come at the viewer so hard and fast that they are eventually crushed under the weight of their own insistence. Ultimately, however, they serve the script brilliantly.

Late in Paul Thomas Anderson’s 1997 masterpiece, Boogie Nights, there exists a scene where-in our (mostly) likeable anti-heroes (played by Mark Wahlberg, John C. Reilly, and the amazing Thomas Jane), travel to Alfred Molina’s house to buy some cocaine. Wahlberg and Reilly don’t know it, but Jane has an ulterior motive; he’s there to rob Molina. To underscore the tension (which, quite honestly, barely exists mis-en-scene), Anderson employs the character of Cosmo; a too-stoned Asian boy who shuffles myopically around the living room, lighting firecrackers and throwing them. As our protagonists flinch and twitch at the sound of each explosion, so too are we, the audience, expected to squirm. It’s weak sauce in an otherwise excellent film and it’s always bothered me. Like William Castle wiring theatre chairs to vibrate at scary moments during his 1959 film, The Tingler, it’s a gimmick. And a lame one at that.

I bring this up because, at the center of Guillermo Del Toro’s 2001 film, The Devil’s Backbone, we get a Macguffin so obviously intended to generate tension, that it almost collapses under the weight of its own hubris. Said Macguffin is an undetonated warhead which falls into the town square of a remote village during the last days of The Spanish Civil War. As our story unfolds, the bomb sits quietly, a consistent reminder that these characters live under the constant threat of death. It’s thinly-veiled allegory, at best.

Now, having said all that, let’s get to the heart of the matter. Is The Devil’s Backbone an otherwise enjoyable film? Most assuredly. Carlos, a new arrival to the town’s dimly-lit orphanage, begins to experience strange and mysterious things. Is the ghost of schoolboy Santi, haunting the grounds, attempting to warn Carlos of secret dangers? Is Jacinto, the weirdo janitor, correct in his assumptions that the orphanage is home to a secret stash of gold? Are all of these people just a bit off-kilter after years of suffering at the hands of poverty and war? There are no easy answers in Del Toro’s uneven mix of History and Horror, but stellar performances and beautiful set pieces add up to an eerie, little picture that no fan of the supernatural should miss.

Here’s a film from the “Love it or Hate it” school of filmmaking. Personally, I love it. In a 1950s prairie town, a small boy deals with the suicide of his father, the insanity of his neighbors, a gang of pedophile greasers, and his brother’s vampire girlfriend. Just how much you get out of this bizarre film depends heavily on how reliable you find the young protagonist, Seth Dove. Are his perceptions of the events unfolding around him correct? Is he an astute documentarian, peeling back the curtains to shed light on the dark corners of his hometown, or is he simply a warped, little boy, losing his shit? This film features an exploding frog, creepy twins, Viggo Mortensen dying of radiation poisoning, and the corpse of an infant which Seth speaks to and believes to be an angel. Often unfairly (and unfavorably) compared to the works of David Lynch, Skin is a bold, one-of-a-kind experience for the adventurous cinephile.