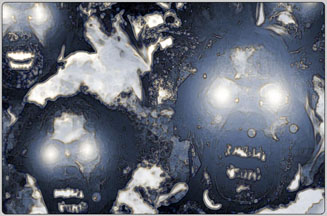 It’s hard not to be a cliche in music nowadays, especially in the EBM/Industrial genre.  Well, in someways, the German four-piece known as Golem 101 has indeed fallen victim to this sad fact, but at least they know how to use all the best cliches to their advantage.  Take a little VNV Nation style EBM for beats and synth, mixed with palm-muted staccato Rammstein guitars, and the not really brutal but still menacing Das Ich vocals, and you’ve got a sound approximate to “Prinzip der Finsternis”.  EBM metal? Industrial darkrock?  Perhaps.

Golem 101 writes songs that are pretty accessible, no extreme tempos, and a fairly pop structure, but this works for them, and makes sense given the obvious EBM influence.  Some parts are almost danceable, but still keep on thrashing.  The guitar riffs are not overpowering, and I would hesitate to catagorize G-101 as a metal band, industrial or not (they’re no Ministry or November 17), but the term rock doesn’t seem to do the level of aggression any justice.

There’s not much for melody in the vocals, but there are a few chants here and there, and the gang vocals on the title track make for a nice change and make the song a bit more epic.  There’s no growling and the screaming is kept to a minimum, but venom does drip off the tongue.  We rivetheads do love our distorted vocals.

The band does manage to avoid an industrial cliche by avoiding obvious movie samples.  The few spoken dialogue samples are well placed and work well and not immediately identifiable.  Golem 101 reminds me a bit of Skinny Puppy in this way.  Superb.

One of the stand out tracks is entitled “Ozean”.  On this one, they ditch the EBM drums for a standard rock beat.   The vocals are delivered rapid fire (sounding very Das Ich here), and the guitar line comes in on the chorus (Rammstein style).  A nice and fast high-energy tempo gets the blood pumping.  Those less prone to headbanging, and more prone to pogo, may disagree with me here.

There are a few duds on this album.  The song “Titanium” seemed a bit uninspired (dare I say cheesy) and the attempt at veering off course on “Der Schwarze Hund von Eppenstein” results in a bit of a train wreck.  “Roboter”, which is more of an anomaly and not a dud, is a salute to Kraftwerk.  The other tracks seem to have a similiar sound and style and gel well together.

As far as the production goes, this album is quite flawless.  All the levels are perfect, and everything is crispy and sterile (in the proper electro way).  The four-on-the-floor kick drum has good bass but doesn’t overpower anything.  No annoying or screeching out-of-control high frequencies.  There are no abrupt jolts or anything jarring when each song changes.  More impressive still, since the recording was done by one of the band members.

Similar pride has been taken in the packaging.  Golem 101 has produced the real deal here.  No poorly xeroxed covers, or CD-Rs, but instead a very nice printed multi-page booklet and clear tray with insektoid graphics.  It’s nice to see such dedication and attention given to something self-distributed.

And now on to the bad parts. Listening to Golem 101 never floored me. They maintain a constant base rate of quality but there wasn’t anything that punched me right in the face, or made me drop my jaw.  The guitar riffs are pulled straight out of the Rammstein (Herzeleid era) camp, which are just simple 80s thrash riffs to begin with. There aren’t any leads, which could be a potential since they have dual guitars. The drums (being programmed) could do so much more than they do.  This might be because they want to keep a dance groove and not stray into “intelligent dance music” territory, I wouldn’t know.  I never really felt compelled to mosh, shake my hips, nor nod my head in appreciation of the musicianship.  It seems that G-101 is straddling a fence and maybe this is holding them back.

However, considering the state of electro-metal, this is quite a good album.  Those expecting something brutal like Malmonde should stay away, but those who like to groove to something heavier should check out this album.

Better than anything KMFDM has done for years. Hear me, Sasha?

A thousand tons of light, I am between