WATCH OUT FOR TOAD-DEMONS AND SEX-CRAZED TALKING SKULLS 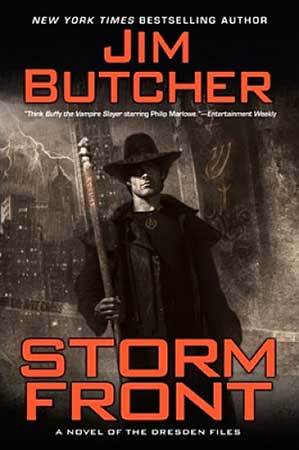 Harry Dresden is *not* what comes to mind when one hears the word “wizard.” This word summons images of bearded, wizened old men in cloaks with pointy hats and magic staffs. Harry Blackstone Copperfield Dresden is not old, nor does he have a beard and he definitely doesn’t wear cloaks. Staff, though…yes. Harry is a wizard living in modern day Chicago but instead of hiding his abilities like we would normally see in fantasy novels, he puts it right out there, offering his services to anyone who may have need of a man with his talents. His specialty – find things

What I loved most about the character of Harry was the fact that he *was* so different from the stereotypical wizard. While I do love me some classic Gandalf or Dumbledore, reading Harry was incredibly enjoyable because he was *so* real. He curses, eats greasy pizzas, makes mistakes, isn’t graceful or proud and he lives in a crappy little apartment where most months he can barely make rent. Harry is like any other person just trying to get by…except he can use magic.

Jim Butcher’s incredible imagination is brought to life when you read the first of his long-running and much-loved series. From the first couple of pages you can tell that Harry is a person you’d like to go have a beer with on Saturday night. He’s sarcastic, funny, down to earth and very easy to relate to. Butcher created a character with which the reader can really connect. Even when he’s facing down a fearsome demon (in his birthday suit, by the way) or when time is running out and seems there’s no way for him to win against the evil that has sprung up in the heart of Chicago, you can’t stop rooting for him and hoping you can go out for those beers afterward.

I really enjoyed this book. I’d been meaning to read it for quite some time but thanks to the encouragement (actually, he pretty much shoved it in my face) 😉 from a new friend who loves the series, I finally did. Butcher’s writing style is very down to earth and easy to read, like listening to someone tell you a story. It’s a very fun and quick read, providing you aren’t working two jobs and have the time to read for a few hours each day. It seems like every chapter brings something new to the story, whether it be the discovery of a new clue, an attack by some new magical creature, or just the various things that can and do go awry in Harry’s life.

I met several characters who I love already and can’t wait to see again, including a talking skull possessed by a sex-crazed spirit, a no-nonsense cop who takes Harry’s advice seriously on the more “out-there” cases (and who probably fancies him a bit as well), a reporter who will do *anything* to get a story and a snarky pizza addict of a fairy. I’m sure all are favorites for fans of the series and it’s very easy to see why.

It was an incredibly enjoyable read for anyone out there who likes a good murder mystery with a little bit o’ magic thrown in the mix!