Video Reviews
Luc Besson’s first feature film is shot in black and white, which is a stark contrast to his Fifth Element which is one of the most literally “colorful” and vibrant films I’ve ever seen. This was probably a necessity of budget constraints, and not a choice, but it suits the grim post-apocalyptic subject matter. Le Dernier Combat isn’t overly dark though, as it is tempered by a strange zaniness, akin to another post-catastrophe French film, Delicatessen. 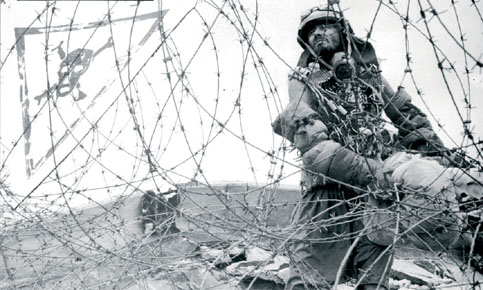 Sharing a similarity with the earlier French film Themroc, Le Dernier Combat is a rare film in that it is a feature length live-action fictional narrative which contains no dialogue. Whether this is an artistic statement in regards to universality, or just a practical way to eliminate French dialogue for an international market, I’m unsure. But regardless of motive, it gives the film a different feel, and in conjunction with a pacing similar to This Quiet Earth, helps reinforce the isolation of being one of the few remaining humans in a bombed-out and destroyed Paris.

Le Dernier Combat is oft portrayed as a post-apocalyptic film, and while this is true, it isn’t fit to be lumped in with the action movies Salute of the Jugger (Blood of Heroes), Steel Dawn, or Road Warrior. With a title translating to “the final battle” you might think there would be a lot of spectacular action, but the combat in this movie is probably more representative of ideological contrasts, or spiritual testing, than an adrenaline fueled kill-em-all-let-God-sort-em-out blitzkrieg. Not helping matters, during what is supposed to be the climactic action sequence, the dated ’80s score intrudes and puts a damper on what could have been a highlight. Those expecting a John Woo movie with dune buggies will probably be disappointed.

I would love to pile on the accolades, because this is very much an art-film, with delightful imagery, and cinematography, but really the only thing that keeps you watching is curiosity. You spend most of the movie wondering what it could all be leading up to, anticipating that there must be some payoff, but nothing substantial really comes. I’m sure there was some intended metaphor involving chivalry, the dark ages, knights, courtly love, Don Quixote, or a princesse lointaine, but I guess I mostly missed it. Still worth watching though, even as just an interesting ride and nothing more.