Ramblings From a Semi-Deranged Mind #5 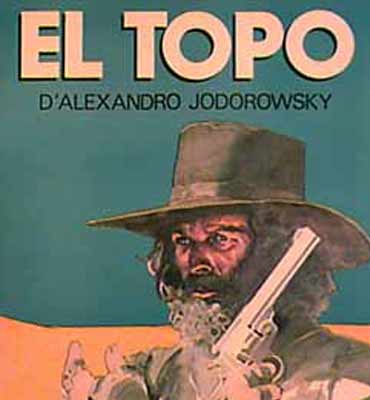 Fellow pilgrims, it is time for the journey to continue. Let us go back in time to 11:58 on December 17, 1970. John Lennon takes the stage at the Elgin Theatre and says: “Thank You for watching my movie and now, if you would, please stay for the following picture. My manager Allen Klein got me to see it and I think it is a significant work of art which you will enjoy.” With these words, the lights go down and, for the first time in the U.S., in a mainstream theater, El Topo is unleashed. It plays for 7 days a week until late 1971, a legend is born, and the concept of the midnight movie is introduced. 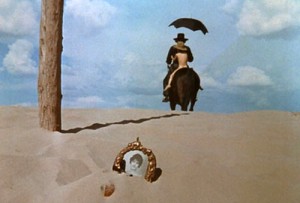 El Topo is a movie about a journey. It starts with a man and a boy in the desert. The man tells the boy to bury his first toy, effectively ending his childhood.

From there they travel to a town where everyone has been slaughtered. The man enters the first phase of his new life: The Avenger. He even makes the boy put one of the suffering townspeople out of their misery, cementing his first step on the journey into manhood. 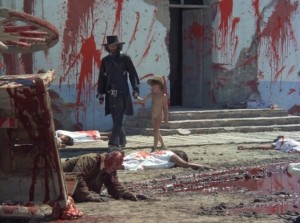 From there, the man tracks down the men who attacked the town and kills them before castrating The General; first metaphorically by exposing him as a frail old man, and then literally by cutting off his balls. He abandons the boy for a pretty woman and enters the next phase of his new life: The Pilgrim.

For a short while, El Topo and the girl are happy. He shows her the ways of meditation and nature, but she soon grows weary of him and informs him that he will never be a real man unless he can defeat The Four Masters, legendary gunslingers who, when found, will test you. You will either defeat them all and become the best or lose and die. Each of The Masters represents a different branch on The Tree of Life and El learns valuable religious lessons from each man as he fights and kills them. “To know your master is to destroy and surpass him.” 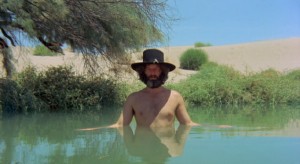 Once El Topo has defeated all four of The Masters, he throws down his guns as if to indicate that he is done with killing. His female alter ego then shoots him dead and the 2 women ride off together underscoring the common Jodorowsky theme that all women are evil. So ends Chapter Two.

The third story arc starts some years later with El Topo immortalized as a religious statue on an altar. When a small woman kisses him, he comes back to life and is reborn as a monk. He discovers that some townsfolk have been trapped in a mine and becomes determined to clear the rockslide and free them. We soon learn that the residents of the town below the mountain are racist assholes who force black men to kill each other for their entertainment. Suddenly, a mysterious priest rides into town and we discover that he is none other than El Topo’s son; the one he abandoned earlier. Junior is there to wrestle control of the church from its phony messiah and make it an authentic place of holy worship. And he does make it real; he makes it real with a bullet! (It is worth noting here that all the town’s religious symbols are similar to the Illuminati’s All Seeing Eye, the one most commonly seen on U.S. Currency).

El Topo goes to the town and works for cash so he can continue digging his tunnel and save the trapped townspeople. He runs into his son, who wants to kill him, so he changes out of his monk robes and into his outfit from the first story. Once El finishes the tunnel, the inhabitants run out and are immediately slaughtered by the townsfolk. El Topo then goes insane and kills everyone in a crying fit of fury. Afterward, he immolates himself just like the famous monks from Vietnam. His grave is covered in honey as his son and wife ride out of town together.

The film is split into four parts because Mexican Union rules at the time specified that any non-Union director couldn’t make a feature film, only shorts for T.V. Jodorowsky skirted these rules by making four short films about the same characters and then editing them together. 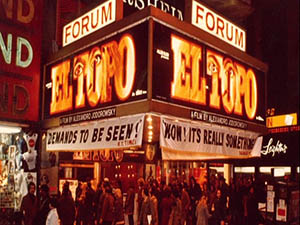 El Topo is about all religion so there is an insane amount of iconography which has been written about extensively by more learned men than I. If you can find the novelization of the script, however, it’s one wild read, annotated with frantic LSD inspired ramblings by The Director himself.

El Topo is a mystical head trip of godlike proportions and a must see for any student of cult films. I love his next movie even more, but that’s a subject for another time. I recommend anyone with a taste for the weird see this film and see it as soon. This was Jodorowsky’s biggest hit and it introduced the whole subgenre of the midnight movie which I will discuss further in my next installment. I hope you have enjoyed the journey so far and will continue along with me.