“HELLO. MY NAME IS INIGO MONTOYA…” 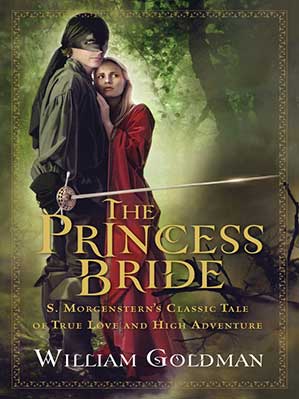 Buttercup, a poor farm girl in the land of Florin, is the most beautiful girl in the world. She attracts the attention of her farm hand, Westley, who falls in love with her the moment he sees her. After buttercup finally realizes that she loves him too, Westley goes off in search of his fortune so he can marry her. Soon after, she receives word that his ship was attacked by the Dread Pirate Roberts, a scourge of the sea who leaves no survivors.

Years later, Prince Humperdinck proposes to Buttercup. She immediately refuses because she would never love anyone as much as she did Westley. The Prince doesn’t much care for love; in fact, he doesn’t really care much about getting married in the first place. But his father’s health is failing and he will soon be crowned King and need to produce a male heir. Buttercup decides that, even though she will never love again, she could perhaps be relatively happy with marrying the Prince.

Before the wedding takes place however, she is kidnapped by three strange men (who, we later find out were sent by the Prince, himself!), who take her to the neighboring country of Guilder where they plan to kill her and start a war between the two countries. A mysterious man in black comes to her rescue, however and beats all three of them at their specialties of fencing, strength and wit. It is soon revealed that this is none other than Westley, who is now the new Dread Pirate Roberts! The couple reunites and tries to escape Prince Humperdinck as he tracks them across Guilder.

After surviving the horrors of the Fire Swamp they are found by Humperdinck. In an effort to save Westley’s life, Buttercup promises to marry the Prince as long as he doesn’t hurt Westley. The Prince agrees, though everyone except Buttercup knows he’s lying and intends to torture and eventually kill Westley. Westley is taken underground where he is kept in a special cell, while Buttercup returns to the castle. She eventually realizes she’s made a mistake and asks the Prince to notify Westley and have him return to take her away. The Prince again lies and promises to do as she asks, though he has no intention of doing so.  Several days later when she discovers the truth she tells him it doesn’t matter because her Westley will come for her anyway. In a fit of rage he locks her in her room and murders Westley.

With the help of two of Buttercup’s kidnappers (who really aren’t bad guys!), Westley is brought back and they storm the castle, saving Buttercup, who was about to commit suicide rather than marry the Prince. The master swordsman, Inigo Montoya, also gets to exact revenge on Count Rugen, who murdered his father years before.

I can’t remember how old I was when I first saw The Princess Bride but I’ve loved it and Cary Elwes ever since. I’ve seen it multiple times and each time is more awesome than the last. When I found a copy of the book a few years ago I nabbed it when I had the chance. I absolutely loved the movie so I knew I’d love the book as well!!!

Unfortunately…I have to say…that wasn’t entirely the case this time.

Don’t get me wrong I absolutely love the story! Sword fights, true love and a little bit of magic? Come on!! Who wouldn’t??!!! It’s just that…there were a few things in the book that weren’t really as present in the movie; things that…I really just didn’t like all that much.

The first thing I noticed about the novel was the author, William Goldman, wrote it as if he was producing an abridged version of a novel written years ago by a Florin author named S. Morgenstern. That’s all fine and well; however, there is no record of a version ever being written by S. Morgenstern. In fact…as far as I know there isn’t any record of S. Morgenstern! I suppose his idea was clever and different: writing a novel yourself, but making it seem as if you’re abridging an earlier, classic novel. It’s unique but honestly, I guess I just don’t get the point. Maybe he was scared that his novel wouldn’t be good enough? So instead of putting just his name on it, it wouldn’t seem so bad if no one liked it? I dunno. It just didn’t really speak to me, I guess.

The second beef I had with this book was that the novel Westley was quite a bit different from the movie Westley. The movie Westley was charming, sweet, romantic – someone a girl could easily fall in love with. The novel Westley – well…he was a jerk! Throughout the novel he was constantly treating Buttercup as if she was inferior to him. Barking orders at her, sometimes it seemed, almost insulting her when she questioned him, and referring to her as “woman” all the time. Actually several of the male characters did that. Maybe Goldman was trying to portray an accurate depiction of how women would have been treated back in the day, when we were thought to be second class citizens, incapable of thinking or doing anything for ourselves. But, if you’re writing a romance novel (yes, that’s pretty much what this is); shouldn’t the main male character be someone a woman would want to be with? I know I wouldn’t want to stick around with someone who constantly berated me and made me feel like I was inferior. Who would fall in love with someone like that?

I love the overall story and I always will, but…I’m about to say something I very, very rarely ever say: