Audio Gear
Released in 1988, the TX16W was Yamaha’s first and (for a very long while) last entry into the affordable (yet still pricey) rack sampler market. 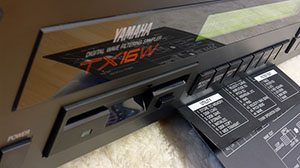 With its specs topping out at 12-bits and 6MB of RAM, there are plenty of modern choices for samplers with much higher-fidelity and infinitely more sample time, but the inherent limitations of the vintage TX16W are its key appeal.

In order to honor the past, and also hold open the door to (retro)future possibilities, we have gathered large amounts of disparate information about the TX16W so that it may be easily found in one location.

Although the owner’s manual mostly pertains to using the insufferable Yamaha OS (as opposed to the universally suggested (and free) aftermarket Typhoon OS), there are enough technical details of interest to make it worth archiving.

For serious and modern work with the TX16W, it is all but imperative to boot to Typhoon 2000 instead of the original Yamaha OS; no self-respecting individual would do otherwise.

NuEdge Typhoon 2000 OS is mirrored here in its Windows and Mac format solely for the sake of redundancy.

However, we have also made available the factory included Yamaha OS disks for those more used to its workflow, in need of a few unique features, or just curious to see why it’s so infamous.

The factory operating system is available in three versions: 1.1, 2.04, and 2.06. Traditional 3.5″ floppy users can use TeleDisk or WinImage to create 720K DD disks on a legacy PC, while HxC/FlashFloppy users can use v2.06 which has been converted to HFE and tested as working.

Special thanks to Jörg Knitter for sorting this, as well as Muki Pakesch, Sonus, madtheory, and teacue for keeping it alive through the ages.

Currently these files are stored in native Yamaha format as they are the most compatible for Yamaha, Typhoon, and Cyclone usage. Ideally, the entire library will be converted into Typhoon format for convenience, but as of right now we only have a select portion available as Typhoon images.

FAQ: Here is the TX16W FAQ which was compiled by Muki Pakesch, originally found at http://www.t0.or.at/~mpakesch/tx16w/ (now mirrored).

FLOPPY DRIVE REMOVAL: While the natural inclination is to open a rack mount device from the top, doing so with the TX16W in order to remove/replace the floppy drive will lead you astray. If you look at the floppy drive from the top, it will appear as if you need to remove the 4 screws that connect the drive mount to the front-side of the TX16W. THIS IS NOT NECESSARY!

The proper way to remove/replace the disk drive is to flip over the TX16W and also remove the bottom panel. This will give you free access to 4 screws connecting the underside of the mount to the floppy disk drive. The mount itself never needs to be removed.

You must still remove the top panel in order to remove the mini-molex connector that supplies power to the floppy drive, and also to disconnect the floppy cable. After that, the drive simply slides right out.

Note: The floppy data cable is REVERSED compared to the usual/standard way of connecting a floppy cable. Pin 1 (with the green stripe) goes away from the power connector on the floppy drive. This is quite unusual and if replacing the floppy with an HxC or non-stock floppy drive then you will have to keep the cable flipped, even perhaps needing to file off the cable connector “key” that prevents it from being connected normal-side up.

Reading from physical 3.5″ drives is not directly supported, but TX16W files can be copied beforehand from floppy disks by using Windows File Explorer as normal.