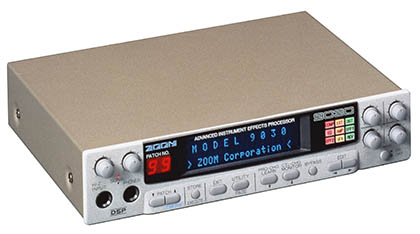 Schematics for Zoom gear of this era are nigh impossible to find, but the information below might be helpful.

The manual only mentions how to restore ROM presets one at a time by using the Utility function. This is not only inconvenient, but not comprehensive because any other general settings (display brightness, etc.) are left intact. As such, the common tactic to doing a full factory reset is to remove the coin cell battery for a period of time to clear the memory, but this requires opening the 9030 chassis.

Fortunately, there is an undocumented feature called “SELF-INSPECTOR” which provides for an actual full factory reset without having to manipulate the battery.

The last test mode allows for a full memory wipe which clears all global settings and overwrites any user changes with the ROM defaults.

Other tests include RAM, LED, encoder, and display diagnostics.

The firmware binary is available and can be written to a suitable 256KB EPROM.

Note: Special care should be taken not to mar the paint when removing the jack nuts! Use masking tape or some other method to protect the surface, if needed.

– Remove four screws total (two per side) which retain the display assembly.

Note: Do not attempt to fully remove the front panel/display assembly. It is attached to the mainboard at multiple points.

Note: Grip the connectors by the plug and not the wires! Tweezers may be necessary.

The majority of the components are accessible without further disassembly, although the bevel for the front panel can be removed to access the encoders, buttons, display glass, etc. There are two screws on the bottom of the front panel, as well as retaining tabs.

It is possible to turn down the display brightness to the point that nothing can be seen. While this is an unlikely issue, it’s worth exploring if someone could have inadvertently changed the setting.

More likely, there is a hardware fault. There is a glass cartridge fuse on the back of the display which may have blown.

The most obvious thing to check is various inputs and outputs. If one input jack works but not the other then suspect that particular jack. Likewise with the outputs.

The 9030 will turn on and function without the PCB-0040 daughterboard installed. Some patches with a high amount of self-noise will even present hiss at the outputs, but no meaningful signal will appear. If “air” can be heard but the input signal cannot be heard then PCB-0040 is worth investigating.

There area around OP9 (4558 dual op-amp) on the underside of the mainboard deals with audio. It’s worth inspecting if one channel of audio is out, and the jacks have already been confirmed as working.