Back in 1992, Stanley Wiater published an article entitled Disturbo 13: The Most Disturbing Horror Films Ever Made. This article purported to spotlight (as advertised by the title) the most unsettling stories ever to be put to celluloid. At the time, I was an Eighteen-Year-Old lover of all things horrific and I made it my goal to seek out and view each of these films. (Bear in mind that, back then, this was no simple task; there was no Internet, no DVD, and several of the titles were long out-of-print). It took more than a few years (as well as the advent of several new forms of media), but I did, eventually, see them all.

Recently, Brian Ross penned an update to the Disturbo 13. Some of the original films remained, while others were replaced by newer titles (all of which are readily available so, no scavenger hunt this time). In the coming weeks, I will revisit the Disturbo 13, offering thoughts and opinions concerning the influence that the films on (both versions of) this list have had on my appreciation of cinema, as well as on my overall world view. 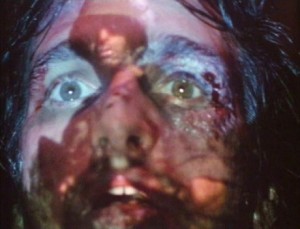 In my last article for this series, I disregarded David Lynch’s Eraserhead as a worthy addition to this list based simply on the fact that I found its dreamlike symbolism too emblematic of a nightmare, too rooted in fantasy, to truly disturb. Of course I realize that a nightmare can be troubling, we all know that, but, once the sun comes up and the sweat cools, we also all rest easy in the knowledge that the clear light of day can chase away our demons and life will go on. Tonight, I will discuss two films which do not wash off so easily; two nightmares from which there is no waking.

First up is a movie which shares many similarities with Eraserhead (a film which Director Buddy Giovinazzo freely admits was an inspiration). Unlike Lynch’s film, however, Combat Shock is rooted so deeply in our reality as to make it nearly unwatchable. Frankie is an unemployed, drug addicted, Vietnam veteran who’s behind on his rent, owes money to a loan shark, and is tormented by flashbacks of his time in a P.O.W. camp. His pregnant wife sits at home with their deformed baby, staring at a broken television set, and listens to the hiss of the radiator. Frankie spends his days wandering the streets of New York, looking for a job and hoping to escape the drudgery of his everyday life. After he’s turned away from the unemployment office and rejected by his wealthy father, Frankie’s life takes another turn for the worse when his buddy Mike overdoses after pouring Heroin straight into an open wound. Later, Frankie himself is beaten severely after he resorts to a desperate purse snatching. No longer able to cage the beast with-in, Frankie explodes in a fit of violence worthy of Travis Bickle (another of the Director’s admitted influences).

Although not as stylistic as the works of David Lynch or Martin Scorsese, Combat Shock wallows in a sleazy realism which I fully appreciate, and here’s why: I can relate, I’ve been there. Now, I’m not a war veteran, I don’t have any children, and I’ve never had a drug problem, but I know exactly what it’s like to be unemployed, behind on your bills, and to have no idea what you’re going to do next; to have a girlfriend or roommate relying on you for bill money when you don’t even know where your next meal is going to come from. I’ve watched days pass slowly, entrenched in a feeling of helplessness, hoping for a miracle. After awhile, you just kind of lose hope; you lose touch with any type of normalcy or reality. You go numb. You don’t have any money, you don’t have any opportunities, and things just don’t seem to be getting any better. Fortunately for me, I’ve always had at least something of a support system. I’ve never had to resort to a life of crime and, although things have gotten fairly uncomfortable for me from time to time, I’ve always had a roof over my head and at least some food in my belly. Still, watching Frankie spiral downwards as desperation chokes out his existence reeks of a very visceral reality to me. The film’s shattering climax is a powerful statement on the realities of truly bottoming-out. 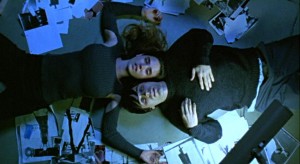 Like Combat Shock, Darren Aronofsky’s Requiem for a Dream is a depressing tale of broken promises and drug addiction. Unlike Giovinazzo’s film however, Requiem is a story of self-inflicted wounds, one that makes it difficult for the viewer to feel truly sympathetic for its characters. Most of the disturbo factor here comes from gross out effects and graphic sex scenes, all of which were designed for just such a purpose. That’s not to say that the film isn’t harrowing in its depictions, however.

Requiem is indeed a rough ride. Intricately weaving the lives of four drug addicts and the pitfalls they face as they attempt to realize their dreams, the film takes a lengthy, meandering journey through the washed out streets of Brooklyn, New York where addiction and desperation are depicted as the norm. At first, the characters seem to have their lives relatively under control; hustling and scamming to get high, but otherwise keeping their eyes on their respective prizes. Soon, however, the pull of addiction starts to get the best of them all and they find themselves doing things they never would have imagined. The film’s denouement is every bit as devastating as that of Combat Shock, however, as I mentioned before, the fact that you’ve spent two hours watching these characters willfully destroy themselves takes a little something away from the sympathy factor.

Requiem for a Dream earns high marks for its balanced depiction of addiction in all its forms. The entire cast is stellar, but Marlon Wayans is particularly impressive, really rising above his goofball persona here to deliver a chilling performance. The score by Clint Mansell is a great combination of doom laden strings and Hip Hop melodies and the whole thing comes together as a staggering work of art. Still, I’ve got to give this one to Combat Shock. It’s nowhere near as good a film, but its situational mis-en-scene elicits from me an emotional response which skews closer to the wavelength of true disturbance.