Back in 1992, Stanley Wiater published an article entitled Disturbo 13: The Most Disturbing Horror Films Ever Made. This article purported to spotlight (as advertised by the title) the most unsettling stories ever to be put to celluloid. At the time, I was an eighteen-year-old lover of all things horrific and I made it my goal to seek out and view each of these films. (Bear in mind that, back then, this was no simple task; there was no Internet, no DVD, and several of the titles were long out-of-print). It took more than a few years (as well as the advent of several new forms of media), but I did, eventually, see them all.

Recently, Brian Ross penned an update to the Disturbo 13. Some of the original films remained, while others were replaced by newer titles (all of which are readily available so, no scavenger hunt this time). In the coming weeks, I will revisit the Disturbo 13, offering thoughts and opinions concerning the influence that the films on (both versions of) this list have had on my appreciation of cinema, as well as on my overall world view. 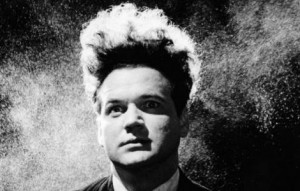 Number Thirteen on both lists is David Lynch’s feature-length debut, Eraserhead. Lynch favorite Jack Nance stars as Henry Spencer, a dim-witted everyman who wanders the bombed-out remains of an unspecified urban landscape, experiencing bizarre hallucinations. As we follow along, viewers are treated to a grotesque Dinner party, the feeding of a mutant baby, and spermicide by high-heeled shoe (among other atrocities). The film’s aimless narrative structure and heavy reliance on bizarre imagery and sound effects, propel the viewer into an otherworldly state of mind, both disorienting and nightmarish. While Lynch fans and Film scholars alike have spent decades arguing meaning and intent, The Director himself has openly admitted that the story was born from the feelings of depression and helplessness which he experienced as a young, underemployed father, living in the slums of Philadelphia.

I was familiar with Lynch’s work from such films as Blue Velvet and Wild at Heart long before I saw Eraserhead. I knew he had a propensity for the odd and that his work could be as baffling as it was rewarding. I went into Eraserhead knowing full well what to expect and still found it to be a dark and challenging vision. From the onset, I felt confident in my ability to read Lynch’s intent, muddled though it was. I recognized Henry as the reluctant father, thrust unwillingly into the complicated role of caregiver and saddled with (in Mary X) an instable shrew for a lover. I saw the detached puzzlement in his attempts to bond with, first his neighbor, then Mary’s parents, and finally with his own mutant son. His surrealistic visions of horror (from the Man in the Planet to the Lady in the Radiator) played to me as Freudian nods to the common human fears of isolation and loss of control. In short, the film did its job and never left me wanting. I got it. I have only one problem with its inclusion on these lists: I don’t find it to be terribly disturbing.

Now, let me explain. In the coming weeks, as we venture down this rabbit hole, I will discuss further the elements that need to be present in a film in order for me to be truly disturbed. First and foremost on that list of criteria is actuality; is this something that could happen to me or someone that I care about? In the case of Eraserhead, the answer, quite simply, is no. The Science Fiction elements inherent in the tale of Henry Spencer, coupled with the films complex, image-heavy, inner workings (hyper-evocative of the dream state), afford me the luxury of being able to distance myself from the proceedings. The likelihood that something of this nature could occur in my life is minimal. Could I impregnate a horrible woman from an insane family? Sure. Could said woman then give birth to a child plagued by disease or deformity? Absolutely. Would all of this take place in some post-apocalyptic nightmare world where everyone was seemingly suffering from PTSD and manmade chickens were carved while still living? No way. And for me, it’s that disconnect which pushes Eraserhead out of the realm of truly Psyche-Scarring Disturbsploitation and places it into the arena of highly unsettling Horror film. It’s definitely a creepy movie which plays well as a Hellish celluloid dreamscape, and there are plenty of moments worthy of their place in the Cult Cinema annals, I just can’t get on board with the idea that this is one of the most disturbing films of all time.

In contrast, I offer my pick for Number Thirteen, the aforementioned Blue Velvet.

Lynch’s Fourth feature, the story begins when Kyle MacLachlan finds a severed ear in a vacant lot. His ensuing investigation leads him into the dark underbelly of an idyllic small town’s drug trade. There he meets Dorothy Vallens, a lounge singer whose husband and son are being held captive and tortured by gangster Frank Booth (Dennis Hopper in one of his best roles). There is nothing otherworldly or supernatural about the events that transpire in Blue Velvet. The film is disturbing because it insists upon grounding itself in the mundane reality of our everyday lives. The tale that emerges is one of obsession, madness, and violence. Lynch’s direction is masterful and unnerving, and Angelo Badalamenti’s score is fittingly haunting accompaniment. Blue Velvet is a jarring, uncompromising powerhouse of a film and easily my favorite from the Lynch oeuvre. 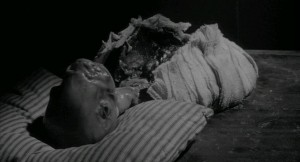 Eraserhead was an important rung on my way up the celluloid ladder. It introduced me to a pallet and temperament the likes of which I had never before seen in cinema. Today, it’s difficult to explain to jaded youngsters just how original and groundbreaking the works of David Lynch actually were. His directorial sensibilities have been so oft aped, that the term Lynchian is now regularly used to describe any film with a bizarre undercurrent. For me, Eraserhead (along with the early works of John Waters) paved the way to such films as Adam Rifkin’s The Dark Backward (1991) and Dave Borthwick’s short The Secret Adventures of Tom Thumb (1993); pictures which I now adore, but may have otherwise dismissed as too bizarre or undeserving of my attention.

NEXT EPISODE: COMBAT SHOCK/ REQUIEM FOR A DREAM