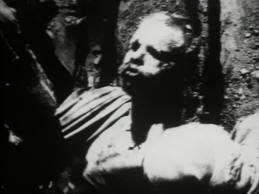 Begotten is an experimental film by E. Elias Merhige with bleak, alien, grim, horrific and hallucinogenic imagery. Visually similar to Pi, Eraserhead, and Tetsuo, this was shot on high-contrast, B&W film stock then heavily processed. An extreme amount of post-production work went into achieving the unique grainy ‘no-grayscale’ look, as each frame was rephotographed and manipulated.

The audio is less stunning, though fitting. It features only a minimal soundtrack of grunting and ambient insect noise, which lends itself to being fodder for music videos. There’s not really anything to miss by replacing the soundtrack with an album of your choosing, which can alter the effect of the film greatly. Marilyn Manson had this (supposedly) on repeat when he was mixing ‘Antichrist Superstar’.

If that sounds like your cup of tea, then ‘Dragged into Sunlight – Buried With Leeches’ is a good place to start. Turn your volume up loud and click play. Only move on to the real film if this music video held your interest.

Dragged Into Sunlight – Buried With Leeches