Kontakt Imported Libraries (from other synths)

Audio Gear
As many of today’s musicians have found, Native Instruments’ Kontakt software sample synthesizer is one of the most popular and powerful choices available.  Kontakt has the capability to import from many hardware synth formats such as from Emu, AKAI, and others.

There is also third party software available that can extract from some of these proprietary CD formats and translate the equivalent of Kontakt Instruments from them.  Not all result in the best end product however and this author has found that for results that most closely emulate the original sounds, the built-in Kontakt “Import” function seems to yield superior results for the instrument definitions.

(Update – Kontakt provides superior results in the Instrument portion but CDXtract seems to yield cleaner extraction of the underlying samples themselves.  Therefore, I am replacing the Kontakt imported samples with CDXtract samples but keeping the original Kontakt .NKI instrument files.  This requires more labor but after finding some samples in the first three volumes that had one channel truncated resulting in glitched playback, I have redone the first three volumes.  If you have already downloaded them, you may wish to do so again.  The links have not changed.  All future volumes will be done using this improved methodology!)

(FURTHER Update – I have also observed that the bulk import function of an entire ESI-32 CD in Kontakt does not work.  Rather, each bank must be manually selected and imported and then the resulting instrument and sample files must then be moved to a folder manually named with the original bank name OR a separate destination folder must be “set” for the instruments and the samples in the import dialog box.  I have also found that the bulk re-save function in Kontakt works best when used at the bank level but only if the bank is NOT in a common library folder adjacent to other library bank folders.  Otherwise, cross references to other bank samples sometimes occur.  Cross references also occur if you attempt to bulk re-save the entire library.  Also of note is that some ISO virtual discs don’t show all the banks and therefore don’t completely import all banks but IF a physical disc is used as the source, the missing bank or banks show up!)

Unfortunately, the Kontakt Import function does not lend itself to the best result when it comes to organizing the instruments and the associated samples when used in a “bulk” import mode.  Rather, it stores all the samples under a Samples sub-folder of the library folder with the instrument files under a separate Banks folder under the same library folder.  The library name is NOT retained in this process either.

The most portable storage structure for Kontakt “banks” of instruments is one in which the instruments are stored in a folder representing the original “Bank” common to many of these hardware sampler synths, with the instrument (.nki) files stored directly in the root of that bank folder and with the associated samples stored in a “Samples” folder under that bank folder.  This allows any bank to be moved to any destination as a single unit and instruments in that bank can subsequently be opened directly from within the Kontakt File tab in the left-hand pane without “lost or missing samples” error messages appearing.

This is the format of all the imported library files found here.

The library master folder names are based on the source synth followed by any library collection name, then followed by the library name itself and finally with a .NKI appended to identify the end resultant format.

The first collection being offered is the 17 volume Emulator EIIIx / ESI-32 (E3) “Classic Library” elsewhere on this site in the original Emu format.

Emu produced a number of hardware synthesizers for which numerous libraries were available.  Theirs were among the more iconic synthesizers of the 1990’s (and beyond) and Kontakt can import and play most all of them.

Note: See premium content information at the bottom of the page. 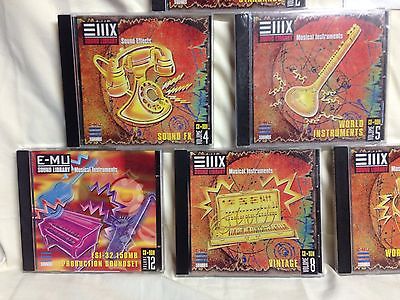