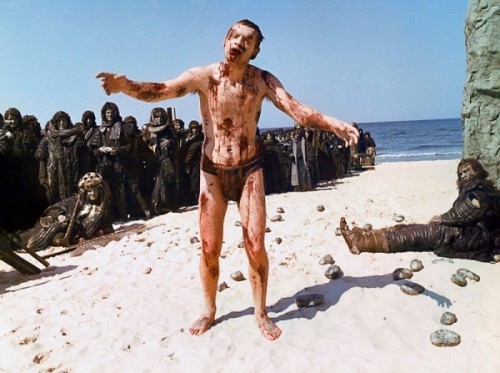 This is one of those reviews that almost fell through the cracks. It’s an intriguing film, yet there’s so little that can be said about it to prepare a potential viewer.

There are some movies destined to make anyone but the most dedicated film buff ask, “What the hell is this?”, and On the Silver Globe is a prime example. Simply by virtue of being a foreign film, it’s bound to lose a few people, but it’s also a surreal arthouse film based around religious allegory, and two-and-a-half hours long. It uses unconventional camera techniques, and has a non-linear narrative. It’s chock full of screaming, flailing, pleading, and dramatic invocations. The characters seem to be stuck in some constant shamanic drug-trip gnostic revelation. In other words, unless you’re one of the rare few that love bizarro cinema, then you will be driven insane by this.

It takes a bit of effort and research to truly understand what director Andrzej Zulawski is trying to convey, the meaning of which is complicated by the overwrought, melodramatic dialogue (worsened by the necessary Polski-to-English translation). On the Silver Globe is based upon a science fiction series called “The Lunar Trilogy” which was written by Zulawski’s great-uncle, Jerzy, and becoming familiar with this written work goes a long way towards understand this visual adaptation. It would be nearly impossible to follow this already demanding 3-act behemoth without some kind of primer beforehand. Unfortunately, reading the work in English is not possible, so a synopsis will have to suffice for those attempting to decipher the finer points of On the Silver Globe.

Perhaps the primary issue lending confusion to the chaos is that this movie is incomplete. Due to oppressive Polish political policies, Zulawski was forced to abandon filming this project, and was only able to return to it after a long hiatus. This has resulted in sequences of the director’s narration interjected into various places in lieu of the intended footage, further breaking an already disjointed continuity.

Some viewers will be aggravated by the amount of effort needed to not only follow the flow of action on screen, but to unscramble the nuances and underlying subtext. On the Silver Glove is certainly not a movie for everyone, but fans of stylish and metaphysically / philosophically heavy works such as Nicolas Winding Refn’s Valhalla Rising, or Alejandro Jodorowsky’s Holy Mountain will likely be enticed by this challenging epic.

On a technical and photographic level, On a Silver Glove is found lacking, not so much through fault of its own, but that it is hard to source except for bootlegs. Even the widely available DVD edition by Polart hasn’t been given a stamp of approval by Zulawski, and it shows in the desaturated, washed-out colors, and the misty blue tint over the entire film. This obviously wasn’t exactly what Zulawski was going for, as there are prints in existence with more vibrant color, as the still frame at start of this article proves. Supposedly there is a Mondo Vision release in the works, which may eliminate some of these technical flaws, but until then you are probably stuck with the Polart version (at best), unless you are lucky enough to catch it in 35mm at a festival.