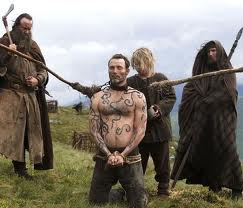 Strange and beautiful art flick from Denmark by Nicolas Winding Refn. More raw emotion and visual poetry than ‘movie’, this is a film that gives you nothing until you give to it. Its cruelly slow pacing fully negates any notions about adrenaline rush battle-fests and comedic one-liners. Despite some extremely brutal action, this film does nothing to demand your attention. You must choose to be involved in what is going on.

While there is a ‘plot’ that advances the story somewhat, a linear narrative seems more for the convenience of the viewer than than to drive home a point. Everything that transpires is liquid, hallucinogenic, and open to interpretation. Sparse dialogue nudges you into various mind sets while your eyes and ears are bathed in dark existential ambiance. Religious iconography and mythological thematics spur you toward vague sensations but ultimately where you end the journey is entirely up to you.

Those willing to brood and ruminate over the nature of violence, the purpose of humanity, and mankind’s quest for a higher power will be able to extract the most from this ambiguous 93 minute trek, but even after dissecting this film, you probably won’t be satisfied. However, that might actually be part of its appeal. It begs to be watched multiple times.

All in all, this thing plays out like the visual equivalent of a Neurosis, Hyatari, or Sunn O))) album. Grim, mostly slow, yet strangely compelling and beautiful in its writhing despair.

For fans of Solaris, Anti-Christ, and Dogme 95 films.

Watch the trailer below.