The Mask of Sanity – Sickness, Thy Name is Human 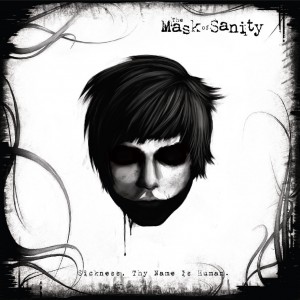 If you’re familiar with the past and present state of electro-industrial then you’ll be familiar with all the cliches and tropes that come along with it. The Mask of Sanity’s debut album Sickness, Thy Name is Human doesn’t do much to shatter those stereotypes or to push the boundaries of the genre, but it is a slick, well-produced standout amidst the thousands of cookie-cutter clones that aspire to the usurp the throne of aggrotech from Hocico, Grendel, and Suicide Commando.

Like most aggrotech projects, The Mask of Sanity also shares a heavy VNV Nation influence, although only in terms of synth melodies. Sickness, Thy Name is Human is much more harsh than the typical futurepop / EBM approach, especially vocally. Utilizing a heavily distorted whisper-talking technique lifted from Zoth Ommog / Metropolis era industrial, the vocals relegate the lyrics to a mostly rhythmic, secondary role, again drawing parallels to Suicide Commando.

The art direction on this release was nothing amazing, with fairly simple black and white, but it was well-presented and reminded me of something out of the White Wolf line of pen-and-paper RPGs (Vampire: The Masquerade,
Werewolf, Mage, etc.) There wasn’t much band info enclosed, probably intentionally as to cultivate an aura of mystery. All of the lyrics, however, are included in the booklet, which is helpful since all the vocal distortion obscures them to the point of being unintelligible.

As far as lyrics go, I suppose most people listen to this style of music for the general vibe of darkness and aggression, but I get something out of a bit of philosophy and thought. I like to resonate emotionally with tales of human experience, and I enjoy when it’s presented with depth of character, and passion. This was probably the biggest factor that detracted from my enthusiasm regarding Sickness, Thy Name is Human. Okay, sure, most other aggrotech projects sound just the same. But that’s really the problem, isn’t it? With the vocals just smeared on top, there’s nothing to captivate you and reel you in. You’re left pogoing on the dance floor, getting out all your hate for society, having a cathartic primal experience. But once the gothic / military style, stomping beats, and razor synths disappear, what do you have? You won’t be humming any melodies to yourself, or quoting bits of lyric like you would a well written poem. Skinny Puppy and VNV Nation lyrics I can remember, and that keeps me engaged in my fandom. Sadly, I’ll probably forget about The Mask of Sanity in a month or two, just as I’ve mostly forgotten about Hocico. Despite The Mask of Sanity’s strong presence aurally, I wouldn’t be able to tell you what any of their songs are titled, and that seems like a lot of wasted potential, because overall I was quite impressed and consider this to rank among the best aggrotech out there.