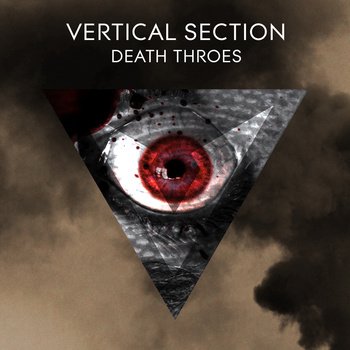 We received a promotional copy of the Vertical Section – Death Throes EP at R-Massive about half-a-year ago, and I elected not to review it. A preliminary listening left me feeling that this was just a derivative rehashing of tired industrial rock cliches, albeit very well put together. Take a little bit of all the late-90s / early 2000 Metropolis / Cleopatra / WaxTrax scene, and put it into a blender, add a couple up-to-date production tricks, and voilà. But, in hindsight, that was a bit too hasty.

I found myself strangely returning to the album, then setting it aside for a while, time and time again. Something about it kept calling me back. Eventually to the point where I knew the lyrics and would recall them with a familiarity only shared by the more successful acts that obviously influenced Vertical Section. If for no other reason, this EP warrants attention because of its pop-sensibility and high production value. It might not be groundbreaking, but what it does, it does better than I’ve seen done for a very long time.

Joel Day, the solitary man behind Vertical Section, doesn’t hide his VNV Nation, KMFDM, Nine Inch Nails, and Front Line Assembly influences, but there’s no slavish imitation present either. Death Throes is a seamless blend of all the aforementioned bands, and shows off technical proficiency. Being a sound designer for Microsoft and Bungie has obviously paid off in the attention-to-detail department. Everything is crisp, punchy, and with an absence of mud. Any effects used are tasteful, and it’s nice to see an “industrial” act using a more natural vocal sound, instead of just whispering through a distorted and delayed microphone.

The cleaner vocals do have one drawback, however. It brings more attention to the occasionally sub-par lyrics. Although Mr. Day is obviously quite intelligent, a couple of the lines used were a little groan inducing, particularly on “Breeder” and “The Pump.” But kudos are in order for not just writing gibberish and hiding behind the rest of the music, as an overwhelming majority of similarly styled projects are apt to do.

If you are into squealing VA synths, crunchy distorted guitars, lush pads, rave drums, and pissed-off yet intelligible and poppy vocals, then this isn’t something you want to miss.