In classic hip hop style, braggadocio, swagger, and odes to smoking weed fill The Diary of Gravity Jones. Intro2daSolo sets the tempo of self-congratulatory boasting, which is both continued and amplified through the team efforts of Middle Finger and Take It or Leave It. Ganja references are peppered throughout most of the album, but the virtues of marijuana usage are most blatantly touted on One Blunt. Slow Down and Catch a Bullet further round out the expected and nearly obligatory feel-good and rough-and-tumble lifestyle themes commonly encountered on rap albums. But The Diary of Gravity Jones is refreshingly multi-dimensional and expands into more thoughtful topics.

New Shit tackles the social concerns of excess capitalism while other moments, such as Two Weeks and Sirens are shockingly confessional and unguarded. But perhaps the most tender, heartfelt, sincere and exposed of all the song on Diary is To Those That Are Gone which is an extended shout-out to all the people that have supported Gravity through all the struggles so honestly documented on this ten song exercise in lyricism. 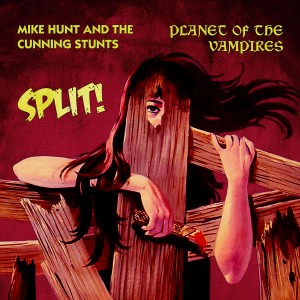 Horror themed EP by psychobilly maniacs Mike Hunt and The Cunning Stunts, along with Tijuana metal band Planet of the Vampires.

Streaming is currently available. Downloads are coming soon for all you iPod addicts.

No comments
A compilation of various hip hop artists on Gigantic Monster Records over the past decade. Featuring Monochrome, Swords of I-Ching, Boss, Ghostie, and Crown Jewels.