OUTLANDER In October 1987, Malibu Comics began publishing Outlander, a seven part series that lasted until July 1988. Starting with issue #5, Outlander was published under Eternity Comics, a Malibu imprint. The comic books themselves aren’t particularly rare, but the title itself is almost entirely unknown. Outlander is out-of-print and … Continue reading

THRILL AND CHILL TO TALES OF THE WEIRD, FANTASTIC, UNCANNY! Strange Terrors was a Golden Age comic published by St. John Publications between 1952 – 1953. Like many other horror comics from that era, Strange Terrors was a simple anthology of pulp stories, usually presented in a “four per issue” … Continue reading

WEIRD TALES OF TERROR! Horrific was a Golden Age comic published by Comic Media between 1952 – 1954. Like many other horror comics from that era, Horrific was a simple anthology of pulp stories, usually presented in a “four per issue” format. There were 13 issues in the series, and … Continue reading 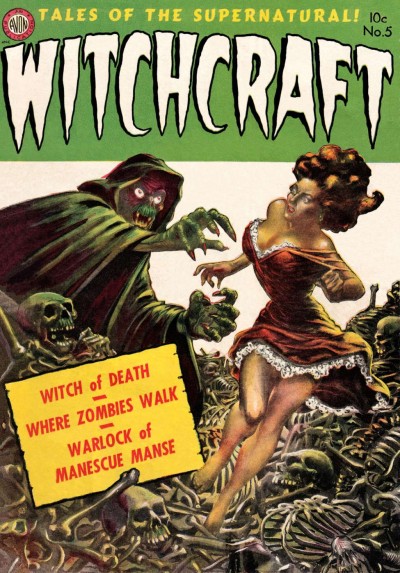 TALES OF THE SUPERNATURAL! Witchcraft was an old-school / Golden Age horror comic published from March 1952 to March 1953 by Avon. Like many comics of its ilk, Witchcraft only had a short run. It ran just six issues, and all are available below. Each issue is really nothing more … Continue reading