The comic books themselves aren’t particularly rare, but the title itself is almost entirely unknown. Outlander is out-of-print and nearly forgotten by time, although the creative team of Scott Finley and Brooks Hagan have reunited for multiple other projects, such as a six issue series of War of the Worlds (Eternity, 1990), Blood Junkies on Capitol Hill (Eternity, 1991), and Joe Sinn (Calibur, 2000). 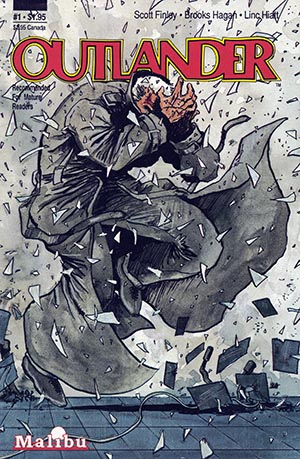 Here’s what Outlander is about, in Malibu’s own words:

Created by Scott Finley, Brooks Hagan, and Linc Hiatt, Outlander is the story of Adam Gallow, a former prompter for the Institute for the Control of societal Endangerment. Working for I.C.E., Gallow became a catalyst for social change in every nation-state with enough civil unrest to make it susceptible to spontaneous revolution.

Until he and I.C.E. Director Gideon Smith fell in love with the same woman (an empath known as Cassandra) and Gallow discovered he’d been a dupe, manipulated and used by The Institute into carrying out their malevolent political whims.

In an epic battle with Smith, Gallow breaks free from I.C.E. and becomes an Outlander. “We’re left with two very disturbed men,” said Finley. “They’re on opposite sides of the American ideology, hell-bent for each other’s destruction, and both in search of the one woman who can resolve their torment.”

Outlander is a story of love, sacrifice, betrayal, and the psychosis of patriotism. “It’s what happens when you sidestep the checks and balances,” added Finley, “and the liberators become the oppressors. And it’s what one man can do to keep the world from total havoc when he’s being pushed to the ragged edge of mental and physical endurance.”

Writer Scott Finley has a screenplay, Courier, in development at Atticus Films. And illustrator Brooks Hagan (who is utilizing a special wash technique with the artwork that gives it a depth not normally found in black & white comics) is a storyboard artist who was once struck by lightning.

Creators Finley, Hagan, and Hiatt will be making a special appearance at Golden Apple on Melrose in Hollywood to promote the book, the first issue of which is on sale right now.

Due to aspect ratio and formatting issues it may be preferable to read these on a Kindle Fire or tablet, but PC users are encouraged to try Comicrack or CDisplayEx.