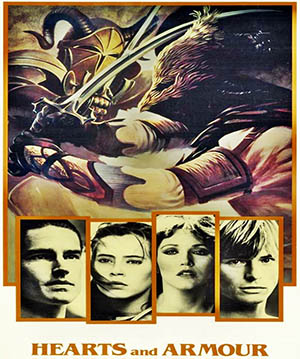 Primarily unknown in the U.S. (and only available on VHS), Hearts and Armour is a wonderfully stylish fantasy film, highly similar to John Boorman’s 1981 Arthurian drama, Excalibur.

The biggest problem with Hearts and Armour is that it was intended for an Italian audience, and it presupposes a familiarity with the material it is based upon, namely Ludovico Ariosto’s epic poem, Orlando Furioso. Unfortunately, this tale that was once considered a classic masterpiece has lost its relevance after being displaced by newer works, and lies primarily forgotten in pop culture, aside from Stephen King’s Dark Tower saga which references the Roland legends.

In much the same way as a Western audience frequently misses cultural references in anime, Hearts and Armour may seem nonsensical without a background in classical Italian literature. Purportedly Hearts and Armour is the result of a trimmed down Italian 3-hour miniseries (although no one seems to have seen — let alone possess — the full production), which likely exacerbates the absence of cohesive storyline. Any potential viewer that wishes to get seriously involved in this movie would do well to take at least a casual glance at a synopsis or rundown of what events are supposed to be transpiring.

Still, this film is enjoyable classic fantasy, if for no other reason than its relatively high production value, nudity, violence, and attention to costume design. Hearts and Armour is arguably flawed in execution, but it’s delivered straightly and seriously. It’s a movie that falls short in many arenas, but it at least strives to be more than low grade Barbarian Queen 2 style trash.