Video Reviews
During the 1980s, in the wake of The Road Warrior, there was a slew of post-apocalyptic films being made. Most of these (Steel Dawn I’m looking at you) are totally lacking in execution and/or substance, but one of the few that stands out is The Blood of Heroes (aka Salute of the Jugger).

Starring ’80s mainstay Rutger Hauer, as well as current Law and Order: Criminal Intent star Vincent D’Onofrio, Blood of Heroes is a tale of wasteland survivors playing a game akin to American Football, except with hand-to-hand combat, and a dog skull instead of a pigskin. These players, known as juggers, are primarily nomads, choosing to wander the desert from settlement to settlement in search of paltry luxuries and reputation. 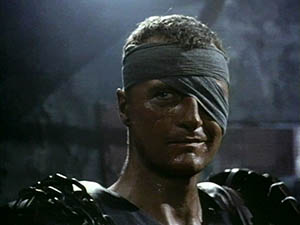 Rutger Hauer in Blood of Heroes

Excessive brutality is of paramount importance in this violent sport played with a loose set of rules, and unlike most mid-budget movies, this bloodletting is depicted in semi-realistic fashion. There’s no weird orange hue to the fake blood, or obvious foam rubber appliances. This no-holds-barred throwdown is believable enough that it retains the “cringe factor” when one jugger breaks another jugger’s leg, or bites an ear off, Mike Tyson style.

In fact, one of the strongest points of this film is its plausible depiction of what Western civilization may be like after its nuclear hastened downfall. There are no ridiculous vehicles, three eyed mutants, or cheesy science fiction techno embellishments. Humanity has simply been scaled down to scavengers, simple farmers, and third world standards of living. Survivors used to more urban environments have retreated beneath the surface where a semi-lawful and controlled state has been maintained by aristocratic rulers.

One interesting anomaly that potential viewers of Blood of Heroes should take note of: The North American DVD release of this is abysmal to the point of being worse than the VHS release. Seriously, the DVD transfer is so botched that you may be turned off this hidden gem entirely. Under no conditions should you subject yourself to the region 1 disc, it’s so atrocious that a 2nd generation tape of its HBO broadcast would be a better choice. The VHS release is a passable version, but the optimal viewing experience is one of the international DVDs, generally released under the title Salute of the Juggers.

Aside from the much improved image quality, select international DVDs have the added benefit of scenes that were eliminated from the North American release. This extends the running time from 90 minutes to 104 minutes, but these longer versions are not uncut. They are an alternate cut with a different ending, and other slight differences. The Australian DVD is probably the best pick of the bunch, and is definitely worth sourcing, especially if you can find the 2-disc set with both the 90-minute cut with the original ending (which may be preferred) and the 104-minute cut. It’s really the best of both worlds.

Those expecting camp, laughs, or ’80s b-movie nostalgia might be turned off by the serious tone of this gritty, bleak, and existential flick, but fans of The Road Warrior, Book of Eli, or La Jetée should absolutely give it a chance.