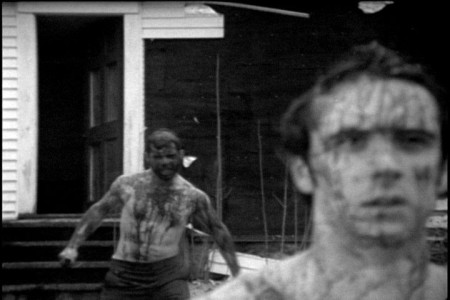 Welcome to Homemade Horrors, a new feature where we discuss low-to-no budget films. Tonight’s flick is Rubber Whore Hell, an independent short from the wilds of Massachusetts.

I first became aware of this movie back in 2009 when a friend turned me on to the production’s Facebook page. I was instantly intrigued by the blood-soaked images I found there and made my way over to Youtube to watch the trailer. It would be almost two years before I finally saw the completed version of this Fourteen minute fever-dream, but the sights and sounds on display in that trailer would haunt me the entire time.

Whore opens on a winter-grey stretch of country back road (beautifully photographed in 16mm) where we meet a young man distressed by that most common of horror movie clichés – he’s lost. What follows, however, is far from cliché. With knowing nods to The Texas Chain Saw Massacre, The Silence of the Lambs, and the films of David Lynch, directors Reuben Blanchard and Nick Lazzaro craft a waking nightmare, boldly infused with a psychosexual undercurrent.

Unlike many amateur productions, Whore does not suffer from stilted acting or underdressed sets, rather the film was clearly a labor of love for all involved and every ounce of the gusto with which it was made comes through on the screen. The violence and gore are well-staged, the ick factor and the weirdness are handled nobly – never becoming cartoonish – and the lighting and set design are just great (I particularly enjoyed the running film projector and the gargantuan Goodfellas poster). The sound design by The Fatal Distraction is exquisite with audio effects and eerie mood music reminiscent of the film scores of John Carpenter and Goblin. There’s also a great rock song by Dick Panthers.

Rubber Whore Hell is a bizarre and disturbing film, well-deserving of your consideration. Everyone involved in its production clearly has a bright future in cinema.

Nathan is a contributor to R-Massive and all around scoundrel. Follow him on Twitter @DiminishingRet.
View all posts by Nate Bradford →
Tagged  horror.
Bookmark the permalink.