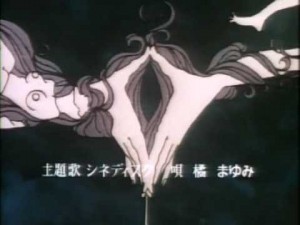 Also known as Belladonna of Sadness or just Belladonna, this is a Japanese animated film by Eiichi Yamamoto. Some would categorize this as ‘anime’, but its style is very little like Akira, Nausicaa of the Valley of Wind, or Grave of the Fireflies, so that might have the wrong connotation. Belladonna is very primitive, yet elegant. It has simple animation, akin to The Beatle’s Yellow Submarine, often times even more crude. Large portions of this are still-frame slideshow animation and not ‘full’ animation. Like the variations in animation technique, the artwork itself also changes throughout. Ink outlines, pastels, oil paints, and full watercolor are used with regularity. It has a very direct-to-paper feel, and seems almost like a dreamy flipbook than traditional cel animation. The 70s psychedelic style veers in many directions, with entire sections evoking Peter Max, and occasionally with some similarity to current retro artists such as John Dyer Baizley. Very few animated films have such a varied visual style.

The theme of this movie is the middle-age persecution of women, specifically those accused and condemned for witchcraft. Our main character is continually thrust into various male dominated situations and violated. Due to the stylized approach to this, it’s hard to know if this is more effective as a critique of misogyny, or as a glorification of pinku exploitation erotica. Kanashimi no Belladonna is very dark, and sexually suggestive, so be warned if that is not your standard fare.

The soundtrack is very dated, in a way that I do not find appealing, but retro-buffs will probably enjoy the strangely whimsical Japanese jazz / rock. I find the music in almost every anime to be wildly inappropriate, so it’s probably an unfair critique.