Video Reviews
a.k.a. CARODEJUV UCEN (Czech) [Not to be confused with the 2008 live-action film, Krabat]

Krabat is a dark fantasy tale about an orphan and a magician, based upon the German book The Satanic Mill, which in turn was based on an old Sorbian fairy tale. Our young protagonist has the bad fortune of falling into the clutches of the black sorcerer and having to endure many hardships. All seems lost, but, as with most fairy tales, the dark and sinister is oft-thwarted by the powers of good. And, like most older fairy tales, Krabat is disquieting, grim, deadful, and not truly suited for children. 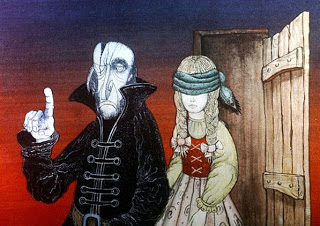 This is a Czechoslovakian animated film with a unique look, similar to woodcuts come to life. It is reminiscent of those gimmick books where you can open a door to see what’s behind, or pull a flap to make something move. Zeman created a very stylized film, perhaps due to necessity. It’s a case where working within limitations can be your virtue. It’s almost like a mutant cross between South Park and Fantasia. The atmosphere is eerie, creepy, and conveys the hopelessness of the situation, but it’s also fantastic, mystical, and oddly beautiful. This may not be one-of-a-kind, but it’s close. There are few films that have this same feel and content. Definitely a lost treasure of early animation, nearly unknown to the English speaking world.

Although done in a now primitive, obsolete, and low-budget manner, this film is put together with so much imagination and care that it remains captivating. Containing layering and parallax scrolling, it’s hard to imagine the pain-staking effort that must have gone into this. It’s obvious that the love of the craft compelled him. Armed with little more than imagination, he has put many modern, advantaged filmmakers to shame. The splashing water effects must have been quite a challenge. I only wish there was a behind-the-scenes documentary out there that explained Zeman’s techniques with this masterpiece. Apparently his daughter Ludmila was an illustrator and she helped him construct the paper puppets, but little else seems known.

For fans of: Fantastic Planet (1973), Brothers Quay, and Jan Švankmajer.