Video Reviews
a.k.a. The Trip a.k.a. Tabi

This is a Japanese cutout animation film by Kihachiro Kawamoto, chronicling a young woman’s journey by plane to an unspecified city. 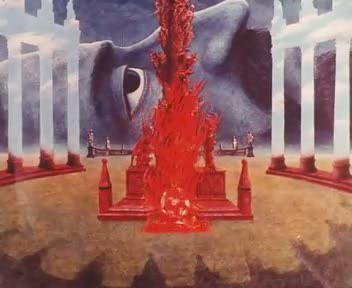 Differing from his usual technique of puppetry, this film is illustrated, and animated by a stop-motion style known as kiri-gami. This cutout style is apparently an homage and tribute to Kawamoto’s mentor Jiri Trnka, the famous Czech puppeteer and animator.

There’s a very M.C. Escher / Salvidor Dali / Picasso feel to this which makes it other-worldly. Metaphysical, dreamlike, surreal, and very symbolic. Thoroughly explained by an interview with Kawawamoto himself:

A lot of people say “I don’t get it”, but I know very much what it means. In the Spring of 1968 the Soviet Union invaded Prague and killed a lot of Czech people. The film is about the Life of Suffering.

Buddha says that life is suffering and there are four basic sufferings: birth, disease, aging and dying. These are the four major sufferings in a person’s life. There are a further four sufferings that Buddha spoke about. These are having to meet people you find annoying, being parted from a loved one, not getting the things you desire, and the sufferings of the mind and body. In order to get rid of those sufferings one must achieve a state of “satori”, or enlightenment. This is the theme of Travel.

All of these elements of the eight sufferings are contained within that movie. The main character of the girl wonders if the Indian man she meets might be her lover from a former life. There’s a scene where she drops the statue she is holding. A Book of a Dead Person is basically about these very same themes.

Kawamoto only dabbled in cutout animation for a short time, apparently abandoning the technique due to perceived lack of talent, but maybe you should decide the merit of that for yourself.

Watch it in full, below.