Audio Gear
Aside from installing a SCSI2SD device into the ESI-32, ESI-2000, or ESI-4000 sampler, one of the biggest concerns is how to transfer or copy E-mu content from the computer (usually in ISO form) to a microSD/SD card so that it can used with the ESI via SCSI2SD.

If the SCSI2SD device is not yet configured and working with the ESI, please see the SCSI2SD XML section at the end of the article. 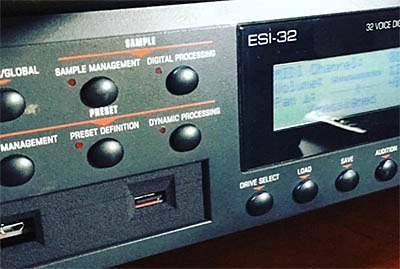 No more floppy or Zip?

As usual, there are multiple approaches and various methods which can be used to do so, but a few to consider are listed below.

Negatives
Requires extra equipment in the form of a SCSI CD-ROM drive, and also creating a disc library of CDs. Requires lots of manual copying via the ESI unit itself.

Positives
This is the closest method to what E-mu envisioned for bank management, so no special conversions or formatting tricks are necessary. As such, it is a method which also works for ESI units with physical hard disks rather than strictly SCSI2SD.

– Burn ISO (or bin/cue) to CD-R using ImgBurn, Toast, Nero, or similar image burning program. Do not write the ISO as an ordinary file, but as an entire disc image!

– Put CD-R in a SCSI CD-ROM drive connected to the ESI.

– Load bank from CD-R, and resave bank to any available SCSI2SD volume.

Custom content can be imported by using EMXP to create a CD (650MB) sized ISO with various EIII/EIIIx banks and then writing it to CD-R for import on the ESI.

Negatives
Requires a legacy (Windows XP or older) computer with a SCSI adapter installed. Does not directly support SCSI2SD, so the ESI unit must be connected to the computer via SCSI.

Positives
Understands ISO images and ESI volumes and can operate on them directly. Like the traditional method, this also works on ESI machines with physical hard disks rather than SCSI2SD.

Negatives
Like the traditional method, this requires lots of manual work to resave each bank. Writing the ISOs to microSD/SD can be a technical obstacle for some users, depending on the “dd” utility being used.

Positives
Does not require a (potentially expensive) SCSI CD-ROM drive, nor burning CD-Rs. Also, this is very close to the traditional method, so it also requires no special conversions or formatting tricks.

This assumes either multiple microSD/SD cards, or that one microSD/SD card has been configured with at least two volumes (usually 4GB each, but not necessarily). This method essentially treats one volume of the SCSI2SD card as a virtual CD-ROM, and the other volumes (or another card) as hard disks.

– Put the newly written microSD/SD card into the ESI, and load the virtual CD-ROM content from the first SCSI2SD volume.

– Repeat the process, overwriting the “virtual CD-ROM” partition each time with a new ISO.

Note: Technically, any raw imaging ‘dd’ type utility can be used instead of RMPrepUSB, such as BalenaEtcher, dd for Windows or even ‘dd’ itself under Linux, but RMPrepUSB has an convenient GUI and works cleanly under Windows.

The current version of EMXP now fully supports ESI models, so the only negative to EMXP is that some people do not like the lack of GUI interface, or are otherwise unfamiliar with how to use the program.

Does not require any extra hardware, and bank management is entirely computer based which tends to be much quicker than manual copying on the ESI itself.

Use spacebar to select a configuration slot, and press enter. Now create a SCSI2SD configuration which matches the SCSI2SD’s internal settings being used with the ESI.

Note: These settings are usually applied to the SCSI2SD via an XML, so those values ordinarily will match.

To do so, define each SCSI2SD ID using Define Device menu options 09-15. Do not forget to change each device to ENABLED while setting the size of the volume.

Enable and configure per SCSI ID

The sector count is the most important, as EMXP can automatically calculate the starting address if asked to do so, and the sector size will always be 512. Do make sure to change the start address, or else all the SCSI2SD volumes will overlap each other!

In an attempt to be helpful, EMXP is often too overprotective. By default, unless the SD card perfectly matches the SCSI2SD configuration in EMXP, the configuration will be rejected when attempting to apply it. To make EMXP more lenient, change to these settings from within the “DEFINE SCSI2SD CONFIGURATION MENU”:

Read the troubleshooting section for a detailed explanation of why this is generally helpful, and also when making EMXP more lenient may not actually be desirable.

Before proceeding, make sure all SCSI2SD devices on the SD card have been formatted via the ESI, if the SD card has never been previously used with the ESI. Windows may prompt “You need to format the disk in drive X: before you can use it” upon inserting an SD card with E-mu ESI volume on it, but do not ever allow Windows to do so. EMXP wants the SD card exactly as it is. That is to say, EMXP needs ESI compatible volumes to be present on the SD card, and Windows would destroy them.

– Use EMXP to copy banks from other EIII/EIIIx volumes (ISOs) to the SCSI2SD.

Select all desired banks from an ISO and use the EMXP copy feature. Choose “EMULATOR-III/X Hard Disk” as the destination type. EMXP will prompt to select the target drive — in this case, the SCSI2SD removable disk.

Note: Each time the drive containing the microSD/SD card is selected, the SCSI2SD card configuration needs to be applied to reveal the contained EIIIx/ESI volumes. These volumes will all have the same drive letter as each other because they’re all part of the same disk as far as the operating system is concerned; only EMXP and the ESI are aware of these E-mu volumes.

Multiple E-mu volumes on one drive.

Select one of the E-mu volumes now listed as an option to commence with the bank copying!

Special note: Older versions of EMXP are limited to only EIII/EIIIx, but newer version support ESI specifically, so it may be beneficial to use the ESI specific menus which are now provided. If desired, use the same steps as above, but select the corresponding ESI menu rather than EIII/EIIIx where applicable.

Negatives
Requires a Zip drive for the ESI, and also a Zip drive which can be connected to a PC (either IDE, USB, or SCSI depending on the computer). Subject to EIII/EIIIx bank limitations. Requires lots of manual copying via the ESI unit itself.

This method is particularly clumsy as the capacity of Zip volumes is smaller than CD, and requires excessive disk “juggling” between ESI and PC.

A significant issue with SCSI2SD configurations is that SCSI2SD has no way of knowing what capacity SD card is going to be used, nor the volume limits of the sampler in question, so there are no safeguards in place to prevent defining devices which are too large to be proper.

When looking at the amount of available sectors on an 8GB SD card, it can be seen that the capacity is not sufficient for two 4GB devices, but actually closer to 3.6GB per device! This means that the first device needs to be configured as 4GB with the second device as a smaller size, or both the first and second devices need to be the same 3.6GB (approximately) size.

Likewise, 16GB cards suffer the same issue. Users will typically attempt to create four 4GB devices, but in practice, only the first three devices are actually 4GB and the last device does not actually fit properly on the drive, although SCSI2SD will not give any warnings about this as it is unaware that there is not enough room on the SD card!

The SCSI2SD unit will report the expected size to the sampler, but when it comes time to access the end portion of that device, the needed sectors will not be available on the SD card which means the data is being read/written to/from invalid space. It would appear that the great majority of SCSI2SD users are walking their last device ID straight off a cliff!

Contrary to intuition, the only way to get four SCSI2SD devices with the maximum volume size of 4GB (as allowed by EMXP) is to upgrade to a 32GB SD card.

Segue to EMXP and its well-meaning safeguards…

By default, EMXP attempts to validate that the SCSI2SD configuration matches the SD card properly. Note that neither the SCSI2SD unit itself, not the sampler generally bother to do the same, so although everything may appear to be properly configured, EMXP is a lot more vigilant and will try to protect the end-user.

Multiple issues arise from this:

In a perfect world, this is how EMXP should indeed behave. However, due to faulty assumptions made by almost every SCSI2SD user (and no other safeguards against doing so), EMXP will almost always reject applied configurations unless these safety checks are first disabled. Changing these default preferences is the quick and dirty solution.

The proper way to remedy the issue is to redefine the device geometries in the SCSI2SD unit itself and then format the devices using the sampler. At this point, EMXP will cease to be confused by the apparently nonsensical requests, and should cooperate nicely.

Ideally, one would take the total capacity of the SD card (in sectors) and divide the value by the number of intended devices (usually 4, but not always) to obtain the perfect size volumes for use with SCSI2SD.

Note that using only two devices with a 16GB card gives a result of 7.2GB. This is fine for use with the ESI alone, but will not work in conjunction with the 4GB EIIIx limit of EMXP.

The key point is that, in practice, SCSI2SD devices almost always need to be approximately 3.6GB rather than 4GB.

As a side note, while EMXP has a 4GB limit, the ESI supports 29360129 sector (14GB) volumes. To maximize storage on the ESI, a 64GB SD card could be used in 14GB by four device configuration for a whopping 56GB! Again, this configuration cannot be supported by EMXP, so the ESI would be primarily self-contained.

The configurations supporting four devices is typically ideal, and should be used under normal circumstances.

The device SCSI IDs may need to be altered prior to flashing, depending on additional SCSI hardware (CD-ROM, Zip, etc.) and also because the E-mu ESI may be set to use conflicting IDs already, as it uses an “Avoid Host” ID and an ID for itself. These can both be assigned in the ESI unit’s Setup Menu, under SCSI configuration: [MASTER]->[SETUP]->[SCSI/DISK].