Audio Gear
E-mu Emax II (Emu Emax 2) owners seeking to upgrade the memory of their unit may be aware that the only two standard methods to get the Emax II to recognize its full memory capacity are either the memory upgrade disks (ZD403 or ZD413) or the so-called “scrambled megs” procedure.

Note: There is also a complicated and hardware based third option which requires desoldering the EEPROM, reflashing it with code read out from the desired target model, and reinstalling the modified EEPROM into the original machine. This advanced method has proved to work in some circumstances, but is also known to be hit-or-miss. As such, it is generally not recommended.

A few users who own upgraded Emax 2 machines may have also run into an EEPROM corruption issue where the sampler no longer acknowledges the full amount of RAM present, even though no hardware changes have taken place. This is due simply to the loss of a stored configuration setting, yet there is scarcely a way to fix the problem because E-mu Systems no longer exists, and the memory upgrade floppy disks are one-time-use only and automatically “self-destructed” during the initial installation procedure. This is wholly unfair to the end-user, who is left with a partially capable device and the bitter taste of feeling cheated.

Should anyone still have a memory upgrade disk which has never been used in an Emax II, it is advisable to immediately write-protect the disk and duplicate it using a program such as Omniflop. After this step has been taken, an infinite amount of writable copies can be produced which can then be used as self-destructing installation disks. 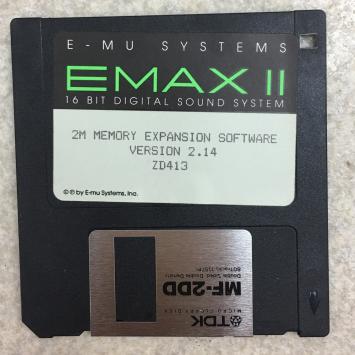 However, ZD403 and ZD413 are not universal in application, as they are each used for configuring a different amount of memory. Aside from potentially needing two separate disks, such unused disks are all but impossible to acquire and have (to date) not been made widely and freely available to hobbyists, so this upgrade path is essentially a dead-end.

The second method has been given the moniker “scrambled megs” as it can be used to fix Emax II units whose EEPROM is scrambled in such a way as to report less megabytes of memory than is actually physically installed. It can also be used in lieu of the memory upgrade floppies after adding additional memory to the Emax II RAM expansion board.

This procedure requires nothing more than the standard OS disk, and can be repeated as many times as desired. The user can easily go into Master/Special/Diagnostics menu and then use the “Adjust Features” option to configure the amount of memory installed and/or whether or not the stereo sampling upgrade has been installed.

Note: Similar to the memory expansion, the stereo upgrade requires an unused ZD868 floppy disk which is also self-destructing. Likewise, the stereo sampling upgrade is disabled should the EEPROM contents become corrupt due to events like static discharge and power surges, or simply “bit rot” due to the advance of time. This memory expansion fix can also be used to restore stereo sampling to any Emax erroneously downgraded to mono operation.

The obstacle with this otherwise ideal method is that the “Adjust Features” service menu is ordinarily locked by a challenge/response type “Authorization” scheme which requires a code generator formerly possessed only by E-mu Systems. Now that E-mu Systems is defunct, the only known way to generate a proper response code is via a private tech who is now charging for each unique response code — which is valid once and only once.

But fret no more: R-Massive has now devised an open-and-free solution which allows unlimited uses of the “Adjust Features” menu, so any Emax II owner with an expansion board can now go to a full 8MB simply by adding the required amount of RAM, and–if necessary–an exchange of PAL chips (for which the binaries are freely available).

By booting with our special magic disk, both the (now well-known) EMAX “telephone” diagnostics code (3629), and the “Authorization:” check are rendered powerless and must accept any given values, so the “Adjust Features” menu is no longer locked out, and either the stereo or memory upgrade codes can be entered — free and forever.

One of these codes are to be entered in the second Adjust Features screen (which is after the Serial # screen), depending on the amount of memory physically installed and whether the stereo sampling upgrade is also installed:

Note: The current configuration code will be listed on the screen before any changes are made. Please write this down, as it can be used in the future to “downgrade” the Emax, or restore it to its prior operating condition, if desired. If you have a code for a configuration which differs or is not listed here, please contribute it. It will be helpful to other users!

Note: PAL or GAL chips can be written with a suitable EPROM programmer, and 44256 256K x 4 DRAM can be found through vintage IC dealers (check eBay), but if an Emax II does not already have a memory expansion board fitted then it is impossible to upgrade, unless someone starts cloning RAM expansion PCBs. Publish the Gerber if you dare!