Video Reviews
Back before the instant gratification of IMDB and the ubiquitous intellectual property infringements of Youtube, the eager horror movie fan was left with few choices for behind-the-scenes information. There were magazines like Video Watchdog, Fangoria, or various fan zines, which provided great textual articles possibly containing a few production stills, but video was a much rarer beast.

In an innovative (yet seemingly obvious) move to fill this void, Full Moon Entertainment began including a ‘video magazine’ called Videozone at the end of their home video titles. These were obviously limited to just Full Moon Entertainment titles, but were nonetheless better than the just-the-trailers advertising approach used by other companies. 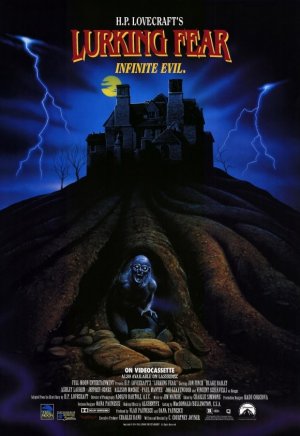 In this age of DVD special features, it’s not uncommon to see ‘Making Of’ footage, but Videozone was ahead of its time, and had a bizarre charm that was uniquely suited to the style of fandom often expressed by sci-fi and horror aficionados.

This particular issue of Videozone was taken from the VHS release of Lurking Fear. It contains a series of trailers (Shrunken Heads, Dark Angel: The Ascent, Puppet Master 5, Invisible: The Chronicles of Benjamin Knight, Arcade, Bloodlust: Subspecies III) and even mentions the incredibly elusive (and nearly lost forever) Pulse Pounders anthology.

But the real gem here is an in-depth featurette which spills all the gooey visceral details on C. Courtney Joyner’s (very, very loose) film adaptation of H.P. Lovecraft’s original story The Lurking Fear. Of principal appeal are the interviews with Ashley Lawrence of Hellraiser fame (billed here as Ashley Lauren), and Jeffrey Combs of Re-Animator and From Beyond, but there are also additional interviews with the rest of the main cast [Paul Mantee, Allison Mackie], as well as a brief overview of the special effects process.

After the Lurking Fear segment, we are treated to an additional Spotlight featurette on Dark Angel: The Ascent director Linda Hassani.

And finally, wrapping up the half-hour of extras, we have a ‘subscribe to our newsletter / join our fan club’ promo filmed at an all-night miniature golf course. Ah, the glory days.