Dragged Into Sunlight – Hatred for Mankind 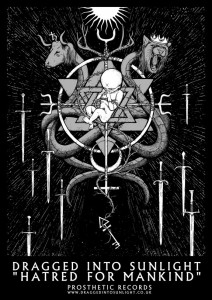 There are so many metal reviews out there that mention how ‘brutal’ and ‘sick’ a particular music release is, that it can be hard to take anyone seriously when they make claims like ‘more brutal than brutal’. But the album title ‘Hatred for Mankind’ is an understatement. I’ve heard -very- little else with as much vitriol as this album. A top-tier bludgeoning that deserves all the superlatives and adjective throw-around surrounding it. Extremely bleak, excessively hateful, and it’s all directed towards one and only one target. Mankind.

The black / death / doom / sludge mixture keeps the knife twisting in your spine, but isn’t so all-over-the-map as to be distracting. Really, really, God damned (literally) impressive work here. It’s not really innovative in any one way, other than how seamlessly they meld each attack into the next. It’s surprisingly fluid and organic, and doesn’t sound stitched together. Just when you thought every hackneyed cliche had been used and abused to death, here comes this soul-imploding eternal black emptiness. I can’t believe the traditional four or five piece ‘rock’ lineup still has mileage left in it, but metal’s dead carcass has been infused with diseased battery acid and beaten back to an unholy undead state. So extreme! Like a nightmarish fingernail scraping through your brain while having an allergic reaction to Haldol.

Surprisingly, the lack of understandable lyrics don’t bother me on this release. There’s just no point in knowing what is being said, because everything that needs to be stated is perfectly conveyed through the mutilated sonic aesthetics in these six tracks. Attitude is everything, and Dragged Into Sunlight has certainly got it. Hate and disgust seeps out into the spaces between the words. The shrieked, growled, vomited throat emissions are almost poetic in their writhing. Others have mentioned that the murderer / psycho killer dialogue samples are limp, but they fit well and serve the songs. Hey, if you want a reflection on what’s wrong with the world, you go right to the source right? I feel that it offers variation and it doesn’t detract from the experience. Maybe the samples and more ambient passages aren’t mind-blowingly creative, but I think Dragged Into Sunlight is more about that certain mixture of ingredients that gels together and not so much about pushing the envelope into brave new worlds.

The production has its subtle flaws, as I can hear moments of clipping, but this album probably wouldn’t sound the same if it had been buffed of all its sharp edges. I much prefer a few technical aberrations than the alternative of having the essence siphoned out by overzealous engineering. It’s far removed from amateur 4-track garage recording kult black metal territory, which, for me, was a benefit.

To the potential listener, beware. The moment you dare to play this album is like breaking into an unholy chapel and having it’s dark luminance contaminate your sanitized precious reality. So vile. Anti. Prepare to exist in a world of shattered hope.

Buy CD / Merch @ Prosthetic Records or watch the video for Buried With Leeches.