Game Reviews
Anchorhead is an interactive fiction game, written in 1998 by Michael S. Gentry. It is done in a gothic suspense / horror style, obviously (and admittedly) inspired by H.P. Lovecraft, and draws heavily upon the ambiance and tropes of Lovecraft’s Cthulhu mythos. While directly referencing a few quotations by Lovecraft, there are very few references to Lovecraft entities / monstrosities outright. 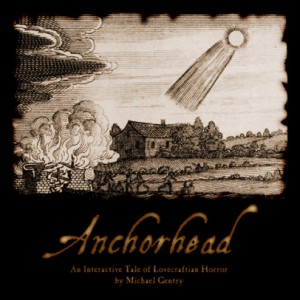 For those not familiar with interactive fiction, it is a text-based adventure (akin to an open-ended branching novel) requiring the player to read descriptions about the environment (rooms, halls, streets, etc.), as well as results provided to commands issued by the player. These commands are often in the form of VERB+NOUN combinations, such as ‘open bottle’, ‘drink wine’, but can also relate to game mechanic tasks such as saving, restoring, or checking your character’s inventory. 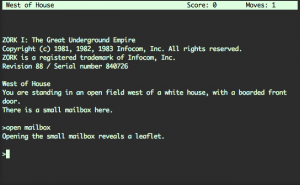 Traditionally, text adventures (especially earlier works) have been designed as a series of puzzles arranged within a closed-world map and dropped into a loose narrative framework, often utilizing artificial stumbling blocks to prevent you from reaching a specified goal. Refreshingly, Anchorhead doesn’t generally fall victim to that character flaw, turning the dynamic on its head by providing a very strong narrative, and using the player’s investigation and interaction with the environment to propel the story.

Part of what makes Anchorhead such a triumph is that the puzzles and environment make sense, and have a plausibility rare to most other works of interactive fiction. Each solved puzzle naturally reveals more and more of the narrative, pushing the player closer to the resolution. The contextual approach makes it practical to tackle problems with logic instead of guesswork. In the event of getting stuck, one can typically think, “what would the game expect me to do here?”, and set yourself back on the correct path. The problems in Anchorhead are very much solvable without resulting to a walkthrough (unlike the infamous bridle problem in King’s Quest IV), which makes the game more an immersive mystery, and less a hair-pulling bout of frustration. Anchorhead isn’t a cakewalk, but its puzzles aren’t impossibly difficult either.

Attention to detail is key, and persistence pays. At times you’ll know (or be quite sure of) what you need to do, but the game will deny you success due to syntactical issues. For example, searching is quite different from looking at something, and looking and reading are different — but not always. You can ‘type’ something into a computer, but not ‘enter’ something. This can be quite frustrating, as well as misleading. There are times when the game will suggest you’re taking an inappropriate course of action, when in fact you simply have to use a slightly different verb. At one point in the game, upon looking in something, Anchorhead will suggest “you don’t have time for that”, but if you ‘search’ through the item, then all of a sudden you magically do have time, and are rewarded with an item you must have to complete the game. Sadly, you cannot always follow the game’s implication that something is not doable, or not important.

There are also events in the game where you cannot take “no” for an answer. You must stubbornly persist, even though the game gives you the exact same answer upon multiple attempts. But these are faults most text adventures fall victim to, at least in some form, so it would be overly harsh to reject Anchorhead because of them. To be fair, Anchorhead does cover a lot of the syntactic subtleties within its “Help” mode, which the player is encouraged to read. But if you’re already familiar with similar games (classic Infocom titles especially) then you might be tempted to skip the “Help” section and dive right in, possibly resulting in a few erroneous assumptions.

If you tend to have attention-deficit issues (and living in an age of hyperstimulation, who doesn’t?), or are new to text adventures, you might be put off by the initially slow pacing. There’s not much much immediate action (and certainly no special effects or loud booms) to hook you in to playing. You have to be willing to let curiosity and the nature of exploration take over. If you give Anchorhead twenty minutes of your time, then you will likely find yourself engaged in the haunting world it portrays. You will find twenty minutes turning into hours, and more likely, days and weeks (dependent upon the strength of your sleuthing).

Anchorhead can be played directly online or downloaded to be run with an interpreter like Gargoyle (Windows / Mac / Linux compatible). Note that you may encounter issues with retaining your save files when playing online through a browser. Installing an offline interpreter is recommended for any in-depth / at-length play.

Helpful Hint: If you’re feeling boxed in by a puzzle during Day 3, then know that there are multiple ways to approach things. If you’re persistent you’ll likely find yourself back on the right track.