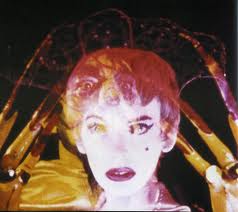 Invocation of My Demon Brother is an amalgam of pre-Manson murder ’60s psychedelia, and Aleister Crowley ritual magick crammed into eleven minutes of celluloid. The pacing of this is much quicker than other Anger films, and when combined with its dark, sinister imagery, presages Floria Sigismondi’s later music video work. Adding even more to the rock video stylings is Mick Jagger’s film score. Done on a Moog Synthesizer, which at the time was a novelty costing about $60,000 (adjusted for inflation), the score is hypnotic and fits the ritualist intent quite well. The music eventually changes to a more dreamy atmosphere towards the end of the film, with a jarring, abrupt cut, but considering the budget and date of the film, is forgivable.

Frenzied, colorful, bizarre images abound. Juxtaposed, super-imposed, time manipulated, and trippy. Both the editing techniques and the subject matter is off-the-wall. Anger shares some similarities with Alejandro Jodorowsky, in-so-much as the blend of the strange and occult, and with little linear narrative. It’s more the experience, texture, and stimuli, than about communicating a particular story.

Some might scoff at this film as low-budget, film-school trash, but they would be forgetting that this was made forty years ago. The elements and style of this film predate MTV, synthesizer music was in its infancy, and there was no such thing as ‘goth’.

Those interested in Crowley, LaVey, ritual magick, intense imagery, ’60s counter-culture, Charles Manson, haunting imagery, or avant-garde films will probably enjoy or at least be stimulated by this work. Others will find this dated, offensive, and/or irrelevant.

Watch it carefully. By the end, you might have the sinking feeling that you’ve been somehow been changed, cursed, or impregnated in a way you’re not fully aware of.