We burn the midnight oil, scraping the bottom of the barrel, to bring you the cream that rises to the top. 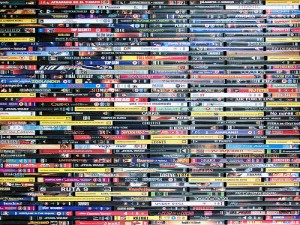 Tonight we present three movies that were released as complete, but weren’t actually finished. Whether they ran out of cash or were shut down in a studio power grab, these flicks logged enough footage to score a release, but they damn sure weren’t the fully finished films that their creators intended.

STEVEN: From the studio bullying him to the orchestra acting like brats, it’s a damn miracle that Frank Zappa got as much of this movie finished as he did. If you can find Zappa’s own documentary about the making of this film (aptly titled The Making of 200 Motels), you will be shocked by the extremes that Frank went through in his attempts to complete this thing.

The ‘plot’ (as it were) of this movie revolves around Zappa’s life on the road and the crazy things that can happen while on tour. Almost all of the backstage stuff with the band was obtained through secret recordings, prompting one band member to walk away screaming: “I KNEW THAT SONOVABITCH WAS RECORDING US!”

NATE: Despite being incomplete, 200 Motels coasts on its experimental, Rock Doc-esque charm. People don’t expect a cohesive storyline when they watch a concert film. They want live performances with some behind-the-scenes tomfoolery. This movie has both in spades and, even though it wasn’t the film Zappa set out to make, it’s still highly entertaining. There’s an old saying in theatre; “If you don’t tell the crowd when you screw up, nine times out of ten, they won’t notice.”

STEVEN: Here is a movie that seemingly got screwed for no apparent reason. At the last minute, the producers took back the rest of his budget and Director Brian Yuzna was left with his ass swinging in the wind, scrambling to obtain alternate financing. He got enough money from the sale of the video licensing rights to produce the Lovecraft wraparound with frequent collaborator Jeffery Combs (who worked for free), and to complete his own segment, ‘Whispers.’ Thank God that Shusuke Kaneko’s ‘The Cold’ (based on the story Cool Air) segment was basically done (save one scene which turned out to be unnecessary). The first segment, ‘The Drowned’ (an adaptation of The Rats in the Walls) should be legend in the cult annals. Christophe Gans, when told his portion wouldn’t be finished, said: “Screw that!” and put up his own cash to complete the project. Despite (or possibly because of) this fact, Gans’ segment is the most gorgeous and polished looking part of the film. Yuzna’s part, ‘Whispers,’ is the least complete because he was busy dealing with production duties. Some people actually like this movie. I don’t, but it’s a good story so, hey.

NATE: I’ve been a huge fan of Brian Yuzna and Stuart Gordon’s Lovecraft adaptations since I first saw From Beyond back in the early ‘90s. I was excited to see Yuzna back in Cthulu country after his brief foray in to the world of the living dead, but Book of the Dead is not the tongue in cheek gorefest I was expecting from the Director of Bride of Re-Animator. Necronomicon is dark and creepy, (albeit somewhat sloppy), filmmaking. The scenes they completed look pretty good and the acting and direction are adequate. Unfortunately, Book has a very ‘unfinished’ feel to it.

STEVEN: Director Bill Rebane ran out of money while making a low budget Horror film. Hershell Gordon Lewis, who needed a second film to show with his own feature, Moonshine Mountain, bought the film, added a few extra scenes and some dialogue, and then released it as Monster a Go-Go. It’s unfinished, confusing, and sloppy (one character’s military rank changes from scene to scene). It’s a total clusterfug, but it’s damn funny at times. Be warned, however, sometimes unfinished means UNFINISHED. This film just stops suddenly, with no ending.

NATE: Cut-throat producers like Roger Corman and H.G. Lewis are well known outlaws in the history of low budget filmmaking. Both came from the ‘Anything for a Buck’ school of production and stories like the one behind Monster are common. If you were to do something like this today, you’d likely still need a six figure budget.

Monster is a one-of-a-kind gem; a hybrid film that tries to be a Sci-Fi thriller with happening dance numbers for the teenagers. Unfortunately, the monster’s not scary, and the cast can’t dance. I agree that this film is funny, I’m just not sure that it was intended to be. The fact that the movie has no ending leads me to believe that Lewis ran out of money before HE was finished. Ridiculous.

NEXT WEEK: THE TOP 3 ROBOTSPLOITATION FLICKS

Nate Bradford is a writer, musician, actor, filmmaker, and philosopher who divides his time between Bangor, Maine and Brooklyn, New York.

Steven Ronquillo is a film geek who has wasted most of his years on this planet trying to see the weirdest and oddest movies he can.

I watch crappy movies so you don't have to.
View all posts by Steven Ronquillo →
Tagged  Lovecraft.
Bookmark the permalink.