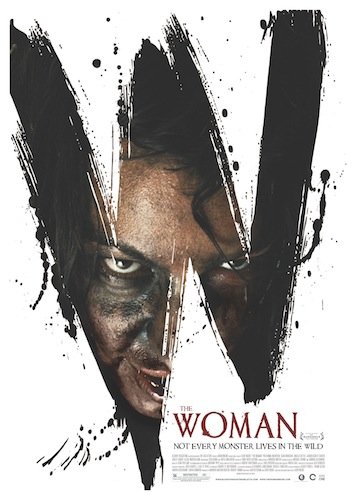 This story dares to confront the dark side of modern family life more than any film this side of Happiness (1998). From the first frame we know something is wrong with this family, but their scabs aren’t torn off until well into the film and once they are, you realize that the nasty, mean cannibal woman is actually the heroine of this movie. In the universe of The Woman, all men are savage, women hating rapists and, in the case of the son, a stone cold sadist. And the worst thing a woman can be in this claustrophobic world is weak, because weak women are punished severely if and when they don’t help their fellow females.

The acting is top notch with almost the entire cast being standouts. This is one of the best no-budget Horror films of the decade and it makes me proud to be a Horror fan. Love it or hate it, this is a Must-See-at-Least-Once film. And for those of you who say they don’t make ‘em like they used to, here’s one that’s just as grim and gritty as those old classics that we love, without the over-the-top shocks used by most of the darker films nowadays.

And finally, a special shout out to one of the best damn Horror soundtracks in awhile! Most Horror films just go for the creepy atmosphere and try not to have solid, stand alone soundtracks (at least at the no-budget level). This may be the best no-budget Horror film soundtrack since Bubba Ho Tep (2002).