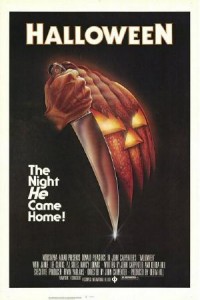 John Carpenter’s Halloween was, upon its release, the biggest independent film of all time so, naturally, it was ripped off faster than a scream queen’s dress at The Eerie Midnight Horror Show. These knock-offs were pure exploitation and pure Halloween, so enjoy. Well, enjoy two of them, anyway. The third one is a sadist’s paradise, strictly for those with an urge to bring out their inner Bob Flanagan. Take care and have a sleazy Halloween! – Steven

STEVEN: Oh, man, this must be Michael Dougherty’s bad ass anthology film from 2007… WRONG!!! Oh, wow, even better. It’s that movie about the kid who gets revenge on the school bullies with help from the ghost of a rock star: “NO FALSE METAL! NO FALSE…” WROOOONG!!! Well then, what in the hell is this? -This- is a lame ass slasher from the early ‘80s about a psycho who breaks out of the nut house and comes home to kill his wife. She’s not home, but their little asshole of a kid (who spends the first half of the movie scaring his babysitter so badly that, if it were me, I would have just killed the little turd) is.

When I first heard of this, I thought it was another title for the splatter/snooze fest, Nightmare (also 1982). I was wrongfully wrong then, and I was wrong again later when I mistakenly thought it to be a Linda Day George film. When I finally saw this thing, it was as bland as eating a fistful of flour. This film is utter crap despite performances by David Carridine and Steve Railsback, and a cameo by Paul Bartel. Watch it at your own risk!!

NATE: I would give anything for this review to be about one of the other two films that Steven mentioned above. Where Dougherty’s film is ambitious and shocking, and Charles Smith’s film is a fun and funny homage, this mess just kind of slides down the cultural GI tract, plops into the toilet that is our civilization, and then simply floats there, stinking up the place. If you ever need a reminder of how callous and lawless the early ‘80s direct-to-video horror market was, look no further than this insult to filmmaking. It’s hard to believe that this mess was directed by a former associate of Orson Welles.

This is currently out-of-print and only available as a 1984 Vestron Video VHS release. -Ed

STEVEN: What does this sleazy, late ’70s, Australian tits and ass movie have to do with Halloween? NOTHING! It’s just the victim of another case of a distributor retitling a movie, figuring that most of the mutants on The Deuce were so stoned they wouldn’t notice the fact that this is not, in any way, a Halloween film. This is actually a pretty good little thriller that was shown on TMC (and in some theatres) as “Snapshot.” It’s about a woman who decides to pose nude for some extra cash and ends up being stalked by an unknown killer. This is a pure Aussie Giallo and the killer’s reveal is awesome. Good fun for fans of Dario Argento and Mario Bava.

NATE: The biggest problem with this movie is definitely the title. Viewed as “Snapshot,” it works fairly well (with the exception of a few lines of simply deplorable dialogue) as a tense-ish who-dun-it. Viewed as wanna-be slasher flick The Day After Halloween however, this film reeks of plotless irrelevance. A Jennifer Jason Leigh look-alike escapes from her abusive mother, makes it big as a model, and then whiles away her nights grooving at the disco to tunes written by one of the dudes from Queen. Also, she’s being pursued by a killer or something. This film is slow moving, but not in a meditative way; more in the manner of the classic Exploitation films of the ’60s. As if the filmmakers had a lot of time to fill, but nothing with which to fill it except gay jokes and (mostly) tiny boobs. That’s not to say you won’t enjoy this sleaze-filled throwback, just know that the bodycount is low and the tempo is slow.

STEVEN: One of the most gorgeous title sequences ever sets off a horror flick that is pure Halloween fun. It’s all about this group of kids who have a party on Halloween in a house infested with monsters. Pure, late ‘80s sleaze at its best.

So why don’t I love it? Well, there’s this subplot about a mean old man who is going around giving out razor blades in apples, and it just shits all over the tone of the movie. It simply feels too mean spirited and unnecessary. I’ve seen fan cuts with this subplot removed and they are freaking amazing and fun.

NATE: There are quite a few films with the title “Night of the Demons”, but there is only ONE Night of the Demons. This flick takes a tried and tested premise, pads its story with stock characters, throws in some intense, nausea inducing effects (including a disturbing scene where a tube of lipstick is inserted into a breast), and comes up with a Halloween classic. There’s sex in a coffin, a naked Leanna Quigley, and so much more. Definitely a great pick for fans of sleaze and gore.

I’m not as against the razor blades in the apples subplot as Steven. I have, however, seen a fan cut with the subplot removed and I found it significantly more creepy. By keeping the focus of the film on the kids partying up at their infamous Hull House (rumored to be built on “evil land”), the proceedings take on a more claustrophobic feel.