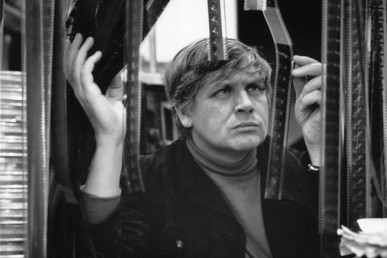 Ken Russell was a one-of-a-kind filmmaker whose movies, a heady blend of humor, horror, perversion, and social commentary, were always guaranteed to entertain, confound, and offend. Tonight we continue our tribute to this legendary cult figure. – Nate

STEVEN: This movie, in my opinion Ken’s angriest, is a condemnation of the suburban lifestyle and a meditation on how, no matter how desperately we may try to avoid doing so, we all drift from one miserable type of existence to another. The story revolves around a fashion designer who moonlights as a hooker to guys who treat her like crap, an insane street preacher (played to perfection by Anthony Perkins), and a bored, middle-of-the-road private eye. Their lives intertwine and they all try to change each other. This may be the most sex-filled movie ever in which nothing sexy happens. One of Ken’s most misunderstood films, this is a must see for all fans of subversive cinema.

NATE: This psychosexual nightmare is bitter medicine, but it’s a pill which must be swallowed if you truly wish to understand the mind of Ken Russell. Kathleen Turner is at her sultry best as a kinky prostitute and Anthony Perkins just kills it as Peter Shayne, the manic preacher who fantasizes about her. This film has some of the most over-the-top dialogue ever uttered on screen and the neon lit streets of the red light district have never looked better. Available in R and Unrated versions. Which version you choose to view should depend on how enjoyable you find graphic scenes of anal sodomy.

STEVEN: Ken was just a hired gun on this one because the writer and the original director couldn’t get along. He swooped in and made one of the best head trip movies of all time. A research scientist (William Hurt) experiments with hallucinogenic mushrooms in an isolation tank. He’s a cold bastard, especially to those he loves. A major plot point involves the experiments helping him awaken dormant emotions and become more human. Some hate it, some love it, but for my generation (the 30 to 45-Year-Olds), this was our first exposure to Ken’s work and that makes it special in a way most people wouldn’t understand.

NATE: Based on a screenplay by Paddy Chayefsky, this confusing movie has some of Russell’s best visuals (the transformation effects are spectacularly excessive) and features amazing performances by everyone involved. William Hurt trips out in a sensory deprivation tank until he devolves physically and mentally into some kind of Neanderthal man-thing. Lighter on humor than most of The Directors work, Altered States is a deeply meditative film that questions the very nature of the link between mind and body. With Bob Balaban, Drew Barrymore, and John Larroquette.

STEVEN: Thank God The Who chose Ken to direct this adaptation of their rock opera. The movie that set the mold for every similar film to come later, Tommy is filled with amazing cameos and visuals and may just be the most mainstream of all Russell’s films. Personally, I like individual moments in this movie, but some things *COUGHCOUGH* Ann Margret *COUGH* just plain suck ass. This movie also proves that Jack Nicholson cannot sing worth a damn.

NATE: The first film of Russell’s I ever saw is still one of my favorites by him. Here’s a movie so excessive in its depictions of child abuse and neglect that the viewer is rendered almost as numb as the title character. Tommy witnesses the murder of his father and is later subjected to sexual tortures at the hands of his step-father, his uncle, and then his priest. Misdiagnosed by his doctors and left in the care of junkies, Tommy emerges as a new age messiah when it’s discovered that he has a propensity for pinball. A classic expedition into the heart of misdirected hero worship, Tommy both celebrates and eschews its flower-child roots. A true epic with memorable performances by Roger Daltrey, Elton John, Eric Clapton, Keith Moon, Jack Nicholson, and Tina Turner.

STEVEN: Ahhh, saving the best for last. Ken’s tale of political machinations in the name of destroying a city’s free government is a classic. So pertinent that Warner Brothers refuses to release it to this day (yes, we’re getting a DVD from BFI next year, but there are so many line restrictions on its release that it’s insane). It’s sad that most people haven’t seen Ken’s best directed and best acted film. I hope a lot of fans (and would-be fans) get the DVD next year and bathe in all its glory. I’ve written a lot on this classic already and I look forward to the days when I don’t have to carry this banner alone anymore. Until then, I will love and champion this masterpiece.

NATE: Russell’s best film is a brilliant condemnation of religious hysteria, coupled with a biting critique of the relationship between church and state. Oliver Reed is Father Grandier, a promiscuous, outspoken holy man who comes under fire from Cardinal Richeliue for his political views. The Church prepares an exorcism for the randy priest, but first he’s subjected to a series of brutal tortures. Not for the faint-of-heart, The Devils fills much of its screen time graphically depicting Grandier’s suffering. Also, there are masturbating nuns. You could write a book comparing this film’s message to everything from the rise of The Nazis to anti-Muslim hysteria in post 9/11 America. A brilliant and timeless piece of work.

Steven Ronquillo has never committed a crime of passion, but he is something of a devil.