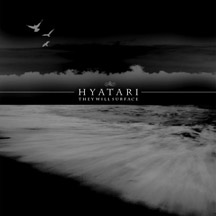 Receiving a promo copy of this album was rather thrilling, after being such a fan of Hyatari’s earlier release, “The Light Carriers”. After inspecting the packaging, which is well-done and still minimal, but more involved than just black-on-black, I turned it up louder than usual and let it run through its entire length.

Hyatari has grown. It’s apparent as early as the ending of the first track. They’ve found a new sense of melodicism to offset their sonic earthquake signature. There were always quieter parts in Hyatari’s music, but mostly of the ambient sound effects and rumbling variety. Now there is a real shift of gears, not just playing soft drone and then loud drone. Sure, the quiet/loud post-metal theme is nothing new, but this is done differently. It’s not the technique, but the attitude and approach that really works here. The heavy parts are still drone-laden/industrial and entirely Hyatari, but the softer, melodic sections are almost like earlier-era Isis. The ending of the song “They Will Surface” is bordering on simple genius with its Cult of Luna stylings mixed with a NIN (yes, Nine Inch Nails) melodic vibe. It sounds strange but its great to hear it explored. The same theme is revisited early on in the final track, “By the Throne”, and there seems to be some Tool influence in here, but I can’t put my finger on it.

“The Light Carriers” approach can still be heard all over the album, most significantly at the start of “Mountain Lit with Fire”, with its drone riffage, combined with the low-mixed samples and a tremolo picked guitar. In fact, some of the riffs used in the heavier moments sound a bit recycled. I know it’s hard to make up new riffs based on sustaining the lowest two-notes of a guitar, but I just couldn’t help thinking of “The Light Carriers” at certain parts.

There are only a couple things keeping this album from being a masterpiece. The first is that when they took two-steps forward, they left ALL the vocals behind. I really liked hearing them from time to time for emphasis. Just a couple little punctuation marks on a couple of these songs could have really done wonders for this album. The second item is the ratio of heavy to soft. As much as I enjoyed the new sound elements and techniques that have been incorporated into this band, it has actually shifted what the band is about. I would no longer categorize this band as industrial drone or doom, but more of a Pelican / Isis / Callisto style band with semi-brief elements of drone and doom. This does have the effect of making the album more listenable, and I’m sure will gather them more fans, but I feel it has diluted that feeling of extreme despair they used to have. They’re still heavier than most bands by far, but I just wanted a few more all-out-crush moments.

I’m pleased to say that I didn’t even think about the production until well into the album. If your ear is turned to the production before the song, then it’s a bad thing. This album is neither under or over-produced. Still the same clear and defined, yet thundrous mix. No sound glitches or uneven volumes, and no sound tricks that wear out your hearing. I think this is a greater feat due to the increased dynamics and subtleties explored on this record.

As there are no vocals or lyrics, other than a sparse amount of vocal samples, I’m not really sure if there is any meaning being the song titles, or if they just describe a texture. There aren’t any clues to a theme in the booklet, other than a general oceanic idea, perhaps related to giant sea-beasts rising from the bottom depths. Maybe best left to the imagination.

If you liked Hyatari’s earlier work, or are into dynamic heavy music and are open to new and interesting things, then I highly suggest getting this album. The great thing is that Hyatari may invoke many different styles, but they never clone. Just a bunch of influences run through their own filters, and they leave an unmistakable handprint on everything they touch.