THESE VAMPS ARE GLITTER FREE 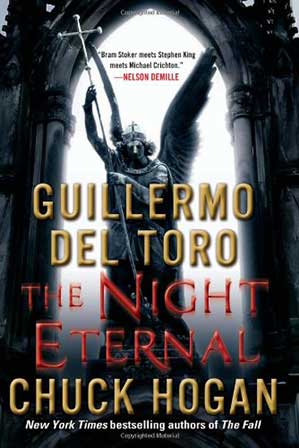 In this thrilling conclusion to The Strain Trilogy, del Toro and Hogan deliver one of their most exciting adventures yet. Two years have passed since the Master first arrived on American soil. Dr. Ephraim (Eph) Goodweather, the former head of the CDC’s Canary Project, along with a few survivors brought together by chance, have been doing their best to fight back. In a world ruled by vampires, where humans are farmed for blood and the sky is perpetually darkened by nuclear fallout, their hope for humanity is quickly fading away.

They have few weapons at their disposal which can destroy the pale creatures that were once human. The slightest touch of silver kills them immediately, the few hours of dim sunlight that manage to filter through the blackened clouds burns them. And, most importantly, the group has within their possession the Occido Lumen, an ancient text detailing the origin of and means to destroy the Master. After hundreds of hours spent studying the book, left to them by the late Professor Abraham Setrakian, expert on vampires and the Master, they still have yet to decipher the book’s secrets. But the hour is growing late; the number of humans still resisting is quickly falling, the Master is close to finding his spot of origin and is soon to transfer himself into a new host body, that of Zackary Goodweather, Eph’s only son.

Before his death at the Master’s hands, Setrakian gave them a vital bit of information: destroy the origin site, destroy the Master. And all of his creations will die with him. With the clock racing forward and all hope for the survival of the human race as it once was circling the drain, Eph and his comrades must decipher the clues of the Lumen to find the Master’s site of origin. Armed with a nuclear bomb lacking a detonator, the group is closing in on the origin site. But, with the Master watching every move they make will they be able to get there before him?

These are not mild-mannered, sweet-talking, sparkly vampires. These are ravenous, bloodthirsty monsters. No glitter involved.

Being familiar with and enjoying del Toro’s directorial work in films such as Hellboy 2 and Pan’s Labyrinth, I was very intrigued to see his name on a book when The Strain first hit the shelves a few years ago. I picked it up, read the jacket…and knew I had to read it. I’ve always been a fan of tales of the supernatural and anything involving a vampire will definitely make me raise an eyebrow in interest.

Del Toro and Hogan approached the subject of vampires in a different way than many others in the genre. Using a doctor as their main character, they treated vampirism as a virus spread through tiny worms that enter the bloodstream when the flesh is broken by a vampire’s stinger. No fangs in these books. As the blood worms travel through the body, the infection grows, mutating the body inside and out. Unnecessary organs are eaten away and reformed to accommodate the needs of the new body. A stinger begins to grow in the back of the throat, which is how the creatures feed on their prey. As time goes by, eventually the body loses all distinguishing features. The hair falls out, the skin pales and unneeded appendages fall off (yes, boys…it’s exactly what you think). They don’t speak, the stinger having reformed their throats. But, they don’t need to speak, they just need to feed. The Master can command his forces telepathically and, through the minds of his army, speak to Eph and all others who resist him. In addition, the Master is able to use the eyes of his creations to search for Eph, keeping watch on all his movements as they near the site of origin.

The writing team did keep a few traditional vampire characteristics in their story, including the newly turned vampire’s desire for their Dear Ones. In many stories of the undead a recently turned vampire will seek out his or her loved ones to feed on first. The same held true in this story, as every vampire returned to their families upon waking, feeding on them and infecting them with the virus. Another traditional supernatural element was the use of silver as a weapon against them. However, in all the stories and folklore I’ve ever read or heard, silver was always a weapon used against werewolves and not vampires. While I see nothing wrong with using silver as a means of killing vampires, it’s just not something I’m used to seeing. Werewolves were always in the back of my mind whenever I read about the characters reaching for their silver weapons. However, I pushed through it and tried not to think of it as I read. I’ll admit, I too was taken in by the sparkly vampires of Twilight for a time, but the creatures in the Strain Trilogy are a throwback to the classic vampires. They aren’t the good looking, smooth-talking creatures of seduction by any means but they don’t sparkle and feed on deer in the woods. They’re smart, stealthy and hungry.
Very, very hungry.

The trilogy was very exciting and entertaining to read. I was hooked from page one of The Strain, when a plane landed at JFK International Airport and suddenly went dark, until the last page of The Night Eternal, when the nuclear device goes off. I’ve never read anything by Chuck Hogan, but having seen Guillermo del Toro’s work in movies, I wasn’t shocked to find that the story was so amazing to read. They made an incredible writing team, creating a story of not only vampires, but the will of the human race to fight and survive.

Mr. del Toro:  Please start working on The Strain screenplay. I want to watch this movie. <3