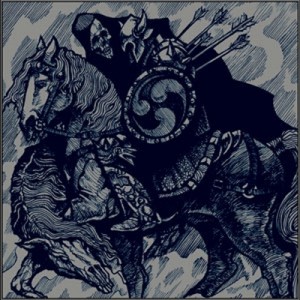 “To crush your enemies — See them driven before you, and to hear the lamentation of their women!”

The guitars are rumored to be tuned almost an octave down from standard tuning, down to drop-f. This makes for tons of low-end rumble, which the production does little to hide. For some, this may be a bit over the top in the bass department, but if syrupy earthquake metal is your poison, then this will be right up your alley.

The vocals are a bit different from the standard doom fare. They’re not altogether original, but they’re presented in unique fashion. They’re an interesting mixture of semi-clean and throaty, better listened to than described. While Conan writes some catchy riffs, there’s something strange about the vocals that may make them the most compelling element.

This album is mostly mid-tempo, but with enough variation in the tempo to be both slow and dismal, as well as exciting and driven. This variation, as well as the shorter EP length, keeps things from getting drawn-out and leaves you wanting more.

Billed as caveman battle doom, this is no walk-in-the-park to be sure, but it’s also not so evil and dark as to be misanthropic. The guys in Conan are nice chaps, so make sure to grab this release if you dig on it.