FOR NEVER WAS A STORY OF MORE WORE, THAN THIS OF JULIET AND HER ROMEO 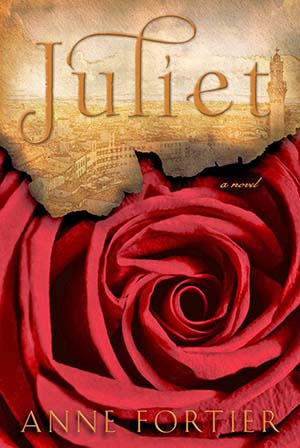 Julie Jacobs and her sister Janice were orphaned at a young age when their father died tragically in a house fire and their mother, only a short time later, is lost in a car accident. The girls were relocated to America to live with their aunt Rose.

Years later, Julie is returning to her childhood home, devastated by the death of her beloved aunt. She arrives at her aunt’s large estate to find Janice already there, of course. As they aged, the sisters had grown apart, Janice becoming the laid-back, fashion-focused party girl and Julie – well, she was her sister’s exact opposite. Reserved and not very social, Julie lives alone, doesn’t have any friends to speak of and goes from job to job, finding teaching positions where she can.

Their aunt Rose had known Julie was the smarter and more responsible one, making the girl her favorite niece. Which is why it came as such a surprise to Julie when the lawyer read from the will that Janice would receive all their aunt’s estate and Julie would receive an envelope containing a key and a letter from her mother informing her that her name is not really Julie Jacobs, but is in fact Giulietta Tolomei.

Hurt and completely dumbfounded, Julie is unable to make up her mind what to do next. After talking with Umberto, her aunt’s longtime, trusted butler and groundskeeper, she decides to go to Siena to see what it was their mother had locked away from her past. What she finds will change her world forever.

Six centuries earlier, Siena is split into several sections which are ruled over by the wealthiest families. The Tolomeis and Salimbenis have been in an ongoing feud, though they currently claim to be peaceful. Giulietta Tolomei, under the dark of night, is smuggled into Siena to live with her aunt and uncle after her parents were brutally murdered by members of the Salimbeni household. While at a ball held by her relatives, Giulietta meets Romeo Marescotti, a son of one of the other ruling families of Siena. The two quickly fall in love but another has his eye on the young Tolomei lady. Messer Salimbeni, enemy of the Tolomei family, has declared his intentions to marry Giulietta, despite her wishes and the fact that Romeo had presented himself to Messer Tolomei to ask for her hand.

As Julie makes her way around Siena, following her mother’s clues and research, she learns more about the lives of the people who inspired Shakespeare’s Romeo and Juliet. Is it possible that her mother’s theory could be true? Could she in fact, be descended from Juliet’s family? Is there still “a plague on both [..] houses?” And will she find her Romeo and break the curse, once and for all?

From the moment I saw this come into the bookstore years ago, I knew I wanted to read it. Again – English major. Someone wrote a new version of one of Shakespeare’s plays? Sign me up! It took me awhile to get my hands on it but I finally did. And I was NOT disappointed!

Fortier did an amazing job weaving the past with the present. We start the novel following Julie’s story as she uncovers the truth about her heritage but it isn’t long before we’re taken back to old Siena, to join Giulietta and read the “real” story of the star crossed lovers.

I’ll grant you, the whole thing about Giulietta needing to find her Romeo to break the curse – a bit corny and romantic comedy-ish. But readers, I’m okay with admitting that occasionally even I, Queen of the Nerds, like to indulge in a chick flick or rom-com. It’s gotta be something in the female DNA. I dunno. So, although the ending could be described as a delicious cheddar or feta, a little fantasy-romance has never done anyone any harm. Except for creating unrealistic standards and ideas.

Unfulfilled Prince Charming desires aside, I thoroughly enjoyed Fortier’s character development and back story. There’s the enduring childhood feud between two sisters with very different personalities; we’ve all had a similar familial relationship, so their arguments and animosity towards each other feels very real. There’s the mysterious Alessandro, who shows a deep dislike of Julie from the moment they meet – we’ve ALL met that one person who just didn’t like us for no reason at all!

Probably one of my favorite characters was Friar Lorenzo, Giulietta’s friend and confidant. We’ve all either read or seen Romeo and Juliet and we all have an idea of who the helpful friar is as a person. Fortier takes the character further through Friar Lorenzo. We see much more character development in the friar and while he has always had a very important role in the story, Fortier brings him closer to the forefront of the novel. It is evident to the reader just how much the doomed couple relied on him, how much he helped them, knowing full well that everything he was doing to assist them was in direct opposition of her uncle’s wishes. I enjoyed watching (well…reading) as his character and importance grew while Romeo and Juliet’s situation continued to worsen. The under-appreciated friar was essential to their happiness (though we all know how it worked out).

Taking Shakespeare’s frequent use of the supernatural into account (i.e. the witches of Macbeth, the ghost of Hamlet’s father, and of course, the entirety of A Midsummer Night’s Dream), Fortier included a particularly interesting evening in Siena – a night of flickering candles in a darkened ballroom, hooded monks, ancient rituals and a little bit of cult-like action! What Shakespeare inspired novel would be complete without it?!

Fortier did a great job in paying tribute to The Bard and one of his most famous works. I enjoyed the journey she took us on as we discovered what really happened in her version, all those years ago in great Verona/Siena. On her website the reader can look at images taken in Siena during research trips; a wonderful thing for us book nerds! Her descriptions of locations within the city were detailed and beautiful and I wished so much to see it for myself. With any luck someday I will, but for now at least I have the wonderful pictures on her website. She’s a rich and impressive storyteller and I look forward to reading more of her novels.