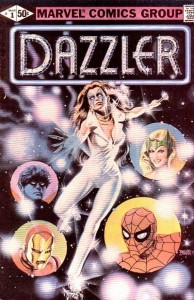 Hollywood has long had an obsession with exploiting fads. Breakdancing kids saving the Community Rec Center, vampires falling in and out of love, zombies rising from their graves to feast on the living, and guys in black suits planning the perfect heist, are all genres which enjoy(ed) memorable (although often times far too lengthy) moments in the sun. No matter how passing America’s interest, studios will find a way to beat that interest out of us by providing a glut of hastily thrown together flicks seemingly designed to make us forget whatever it was that drew us to said fad in the first place.

Enter Roller-Disco, a blip on the cultural radar which came and went so fast, that some doubt it ever even existed. Thank Heavens that a few Young Turks from the annals of filmmaking history made sure that this ridiculous hybrid of two dying trends was captured on film for future generations to enjoy.

Olivia Newton-John stars as a Goddess sent to Earth to help two friends open a roller-disco in this very ‘80s remake of the 1947 Rita Hayworth movie, Down to Earth. This film was a huge flop, but the soundtrack (featuring a bevy of tunes still played on the radio today) was a surprise hit. Gene Kelly was a co-star and there’s even an animated sequence by Don Bluth. A highlight is the “Battle of the Bands” between Proto-Punk band The Tubes and a Big Band orchestra. Michael Beck (from The Warriors) plays one of the wanna-be club owners, but his performance is a wooden mess. This film is so bad that (according to rumor), upon seeing it on a double bill with the Village People’s Can’t Stop the Music, John Wilson was inspired to create The Razzie Awards. Director Robert Greenwald went on to direct a number of extremely Liberal documentaries on such diverse topics as Rupert Murdoch, the wars in Iraq and Afghanistan, and Wal-Mart.

Linda Blair stars as a teenage runaway who helps some friends save their local roller-disco from mobsters in this PG-rated bomb that’s surprisingly difficult to hate. Eschewing both her Beverly Hills address and her aspirations to become a world class flautist, Blair heads down to Venice Beach where she meets cute with Jim Bray, a hot, young roller-disco king on his way to becoming an “Olympic Roller Skating Gold Medalist.” (The fact that such an Olympic event does not exist does little to crush his spirit). Blair decides her dream is to win the big skate contest at local hot spot, Jammers. All she needs is a little guidance from her new pal. After some sleazy mobsters blackmail the drunken Jammer into selling his club so that they can build a shopping mall, Jim and the gang band together to save their hangout. There’s a chase scene where our heroes outrun a car on their skates, and it all leads up to a massive roller-disco dance-off at the end. This movie has some great ‘80s hair and fashion, and the roller-disco sequences are as surreally entertaining as they are unintentionally hilarious. This film was just a pit stop on the fast track that was Linda Blair’s race from The Exorcist to obscurity. Male lead, Bray (who was hired only after the Producers were unable to find a leading man who could actually skate) was never seen on film again. Director Mark L. Lester went on to direct such cult epics as Class of 1984, Firestarter, and Commando.

The Director of Blackenstein and The Happy Hooker Goes to Washington dives head first into the roller-boogie pool (with tongue planted firmly in-cheek) and resurfaces dripping with mixed results. Greg Bradford (who, like Jim Bray after him, would never again appear on screen) plays the naive out-of-towner, lured into the exciting, underground world of roller-disco. There he meets (and immediately falls for) Maureen McCormick (Marsha from The Brady Bunch). This doesn’t sit well with Maureen’s older brother (and the hottest skater in town), Patrick Swayze. He challenges Bradford first to a skate-off, and then (eventually) to a roller-boogie death match. Said death match involves (no joke) the two leads screaming down a pier, towards The Atlantic Ocean, on rocket-powered skates. How much of this is intended to be humorous is uncertain, but there is a levity to the proceedings which seems to indicate that all involved knew they were making a shit movie about a waning fad. Scott Baio shows up as Maureen’s best guy pal, and Flip Wilson and Ruth Buzzi are in there for some reason.

One of the first Hip Hop groups that I was ever interested in was De La Soul. Their second album, De La Soul is Dead, featured the track A Roller Skating Jam Named Saturdays. The song’s video sought to (and successfully did) capture the allure of a funky roller-rink party. For that reason, I couldn’t get it out of my head as I wrote this article. Enjoy.

Danger Brown watches movies and then writes about them for the Internet. His Facebook page is littered with links to cool websites.