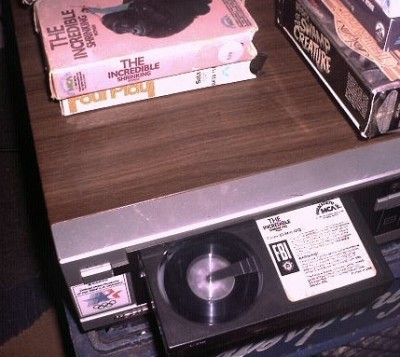 So asks the catchy theme song (performed by famous jingle singer Linda November, who also sang backup for Jimi Hendrix) of this rather forgotten early 1980s film starring Lily Tomlin, Charles Grodin, and Ned Beatty, which I have recently found on Betamax tape. Lily Tomlin plays the main role of Pat Kramer, an ordinary American middle-class housewife looking after her kids with the help of a Latin housekeeper by the name of Concepcion (played by Maria Smith who, interestingly enough, also starred in Andy Warhol’s Bad and The Lords of Flatbush in the decade prior to this film). Tomlin also plays the role of Judith Beasley in this, a door to door saleswoman selling household beauty products, who one day comes by the Kramer household in an attempt to sell her “special” brand of perfume. There is a lot of emphasis on household products here, which leads me to think maybe there is an underlying message in this film, that maybe too much consumerism can be a major bummer.

Pat Kramer, upon her meeting with Judith Beasley, suddenly gets exposed to this strange brand of perfume. The chemicals in the perfume mixed with other chemicals from another strange product called Galaxy Glue suddenly have a weird reaction which causes Pat to gradually shrink. Her husband Vance (played by Charles Grodin) notices her sudden decrease in stature which prompts them to go see a doctor. The doctors become aware of her shrinking and suddenly she is exploited by the mass media. Pat Kramer becomes an overnight celebrity after she appears on The Mike Douglas Show explaining her shrinking problem where in turn, she captures everyone’s hearts across the country. The smaller she gets, the bigger her celebrity status grows. She gets so small she is forced to live in her kid’s dollhouse after her husband nearly crushes her in bed. I’ve always loved the scenes where she is chillin’ inside a Barbie dollhouse, wearing plastic Barbie toy sneakers, sitting on the toy couches and arguing with a Ken doll. I always wondered what it’s like living in a dollhouse. Well I guess this movie is about as close as I’ll ever get to that experience. There is also another scene where Charles Grodin gets her drunk by pouring wine all over her, but she’s so small that pouring just a small amount of wine on her is like an alcoholic tsunami for an ant. She even has to drink out of a thimble and upon pouring a massive waterfall of alcohol on her microscopic body, she gets totally super wasted.

Meanwhile, a group of evil mad scientists led by Tom Keller (played by John Glover) become fascinated by this shrinking woman phenomenon, which leads them to kidnap Pat by making it seem like she died in the kitchen sink garbage disposal. The scene where she is struggling to get out of the garbage disposal, screaming for help, reminds me of the scene in Star Wars where they get trapped in the Death Star trash compactor. Same feeling of claustrophobia, and funny how the rubbish inside the garbage disposal where she gets trapped looks kind of similar to the rubbish Luke Skywalker and co. were dealing with inside the Death Star garbage disposal. After she gets kidnapped, her family gets duped into believing that the only thing they have left of her is the super small Barbie doll sneaker that she left behind near the kitchen sink. They proceed to mourn her memory by burying her little sneaker in a matchbox in the backyard. (I’ve heard from other people who watched this during the early 80s as a kid and they say this movie scared the crap out of them.)

So these mad scientists then proceed to put Pat Kramer in a mouse cage and use her as a guinea pig for their experiments; experiments they are conducting to learn what made her shrink in the first place in order to go forth with their evil plan to shrink everyone in the world. Next to her mouse cage is an intelligent gorilla named Sydney (who eerily looks a lot like the same gorilla from Trading Places), who is being taken care of by a humble young lab custodian named Rob (who is played by Mark Blankfield, and this happens to be his first film role prior to Jekyll and Hyde Together Again in 1982. See my last review for more details about Mr. Blankfield.

This is where the movie really picks up for me. Mark Blankfield is the real gem in this movie and I found myself laughing a lot more at the scenes with him in it. I personally think this movie wouldn’t have been as good if he didn’t guest star. Interestingly enough this movie also has many funny scenes in a supermarket which really reminded me of the supermarket scenes from Jekyll and Hyde Together Again. It seems like there were a lot of movies from this era that involved hijinx at the local supermarket. Other late ’70s / early ’80s movies like Oh God! and Gung Ho come to mind. At the start of the movie there’s a scene in front of the supermarket where this TV reporter is randomly asking customers what they think of this new food product and one lady says to the reporter: “It tastes like shit!!!”

Anyways, the young lab custodian named Rob and the intelligent gorilla named Sydney help Pat escape from the mad scientists. The chase that ensues with the mad scientists ends up back at the supermarket where she tells everyone that she is alive, but suddenly shrinks to the point of being so microscopic that nobody’s able to see her. She falls into another batch of household chemicals that were spilled on the supermarket parking lot where suddenly she returns to her normal size, or so it seems.

I am not going to spoil the rest of this movie. Prior to my last viewing I had not seen this movie entirely since literally sometime in the ’80s so watching it again was really like a blast of nostalgia for me. Again, lots of emphasis on household products and consumerism in this movie, to the point where it makes me feel there is an underlying message that being a product whore can certainly backfire. Kinda makes me feel this is a lighthearted exploitation flick aimed at the whole family! Unlike my last two reviews, this is not a drug movie (unless you think Pat Kramer sniffed some of that Galaxy Glue and that’s why she got that way). This is definitely an early ’80s comedy spoof for the whole family. Rated PG and directed by Joel Schumacher, who is better known for St. Elmo’s Fire and butchering the Batman franchise with his universally panned comic book stinker Batman & Robin (you know, the movie that shows a close-up of Batman’s ass). Who knew Joel actually made a good movie 16 years before that by the name of The Incredible Shrinking Woman (and a string of other good ’80s films like D.C. Cab, the aforementioned St.Elmo’s Fire, and The Lost Boys). I sure as hell didn’t know until recently. As for Lily Tomlin, she is great in this movie. A year prior to this she made 9-to-5, another great early ’80s flick.

Again, watching this on Betamax really adds to the nostalgia factor. Good for late night viewing if you want to be taken to another time period. This movie really has that feeling of the early ’80s during its transition from the 1970s. This was made in 1981, but wouldn’t feel out of place in 1977 with all the hairstyles and clothes. The cinematography and even choices in color seem very dreamlike. A lot of the shading is very bright and it has a lot of green and yellow tones that were very popular in the ’70s. This film really captures that late ’70s / early ’80s atmosphere of American middle-class suburbia so perfectly, the same way films like Over the Edge and E.T. captured it.

Recommended for anyone who wants a sneak peak back to memory lane.

On a side note, this movie was actually test screened to be made in 3D, as 3D, in the early ’80s, was experiencing a resurgence in popularity. Sadly, instead, it was released in 2D. Personally I think it would have made a great 3D film. Some of the scenes do have a strong three-dimensional quality to them, especially when it shows Pat Kramer’s viewpoint of the all too big world from her tiny microscopic perspective.

I dunno, maybe sniff it and watch this movie? Then you will shrink and experience household products like they’re towering giants. Maybe we can all shrink like Pat Kramer and indulge in a towering box of Boo Berry cereal.

GOOD NIGHT AND HAVE A PLEASANT TOMORROW!