The whole ’70s decade was really a turning point in filmmaking and a lot of good stuff came out of it. Films were becoming grittier.  Something that may have reflected the hard social times of the late ’60s seeped into the ’70s and influenced the subculture as a whole. People were also of course becoming more and more open to drug use. Some of the seeds were already planted for the genre known today as “Stoner Comedies” (or just plain “Drug Movies”) in the subject matter that has its roots in early anti-drug propaganda films, which later became laughable pieces of cult exploitation, such as Reefer Madness and Cocaine Fiends.

One of the first seeds planted in the late ’60s and early ’70s, sprouted into what became a rather more positive view of drugs, in such movies as I Love You, Alice B. Toklas (1968), Easy Rider (1969), and Taking Off (1971). No one will ever forget the campfire scene in Easy Rider in which Jack Nicholson, Dennis Hopper and Peter Fonda, all smoke a joint (and upon research I’ve found the “weed” they were smoking was actually real), and then trip out to the night sky. Gotta say good old Jack was really hilarious to me in that scene. And who will ever forget the scene in I Love You, Alice B. Toklas that features Peter Sellers, who played the role of Harold Fine, falling for a hippie woman who gives him a batch of “magic” brownies and accidentally gets all his nerdy unhip friends stoned. And then there’s the very underrated early ’70s gem Taking Off about a teenage runaway.  That featured a scene with Vincent Schiavelli (his first film, and you know the guy, he played the teacher in Fast Times at Ridgemont High) as a counselor in a hilarious scene in which he teaches a room full of parents how to smoke a joint in order to understand their kids better. The scene was similar to the one in I Love You, Alice B. Toklas in that *spoiler alert* a whole room of rather conservative adults get stoned retarded. I totally dig Schiavelli’s afro in that scene by the way.

Fast forward to the late ’70s, the Disco era.  We’d just lost Vietnam.  Jimmy Carter and the gas shortage. Many great films such as Star Wars, Carrie, Smokey and the Bandit, Annie Hall, Freaky Friday, Taxi Driver, Exorcist II: The Heretic (J/K), and Saturday Night Fever came out, but amidst that sea of dirty and grimy, psychedelic, naive ’70s films came a movie that really stands out as far as comedies go (yes, even funnier than the scene in Annie Hall where Woody Allen sneezes at the $2000 worth of late ’70s cocaine). The year was 1978….

A movie comes out called Up in Smoke starring Cheech & Chong, a comedy duo who, by that point, have released a string of popular comedy albums that were centered around their trademark drug humor; a trademark that started from their original stand-up comedy routines. The film didn’t just contain only one scene of drug use, the whole movie’s plot actually centers on the duo trying to score some marijuana and the hi-jinx that ensue. Come to think of it, that was rather groundbreaking for its time. What used to be a rather taboo subject was turned into a full feature comedy. It reflected a time when people were accepting drugs in a more positive light.  The scene where Chong busts out that mega huge joint…well I think I’ll touch on that one in another review. Same with their follow-up Cheech & Chong’s Next Movie (1981). I have both on Betamax tape format. 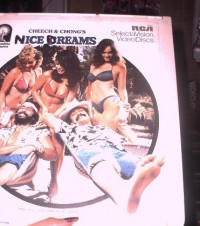 The first three C & C movies are considered to be the holy grails of stoner comedy and a benchmark for drug movies in general. Many refer to them as the “Cheech & Chong Trilogy.” I’ll start from the third movie because it’s my favorite one (and maybe later on I’ll also touch on the rest of their movies).  Anyway, recently I found their third movie Nice Dreams on CED Selectavision videodisc after buying a used RCA CED player off of eBay. Why am I reviewing this movie on such a low quality format you may ask? Well I want to accurately capture that early ’80s atmosphere that the clarity of a DVD or Blu Ray cannot provide. To me there’s something really special about watching an old movie on CED, VHS, Betamax, LaserDisc (also known as DiscoVision when it came out) or even Super 8mm. It’s the same feeling I get whenever I listen to an old 8-track; somehow it brings me back to a different time, like a time capsule.

Anyways I put the CED disc in and….. AHHHHHH!  I remember this flick…. one of my brothers introduced it to me back in the late ’90s on VHS.

First off, whoa! That big wobbly clown head on top of that “ice cream” truck of theirs and then…”Save the Whales! Save those big, fat, funky whales!!!!”  HAHAHA…Oh, God…Cheech is so fucking hilarious in that scene and Tommy Chong’s guitar playing makes it even more funny. We then see what appear to be undercover cops buying their product. The song Save the Whales then continues as the undercover cops spy from a nearby car. And then C & C peel off in their ice cream truck, leaving a trail of marijuana smoke around Los Angeles. 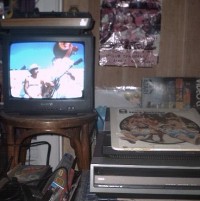 Next comes the scene that shows them house sitting for a marijuana garden grower by the name of Jimmy the Genius. Chong jams with a blind guy named Ray and Cheech waters the plants.  Then Cheech tosses tortillas over a burning oven and serves the burnt tortillas to Chong.

All of a sudden the smoke alarm goes off and Cheech tells Chong not to smoke in the kitchen.

And then we get the return of Stacy Keach as Sgt. Stedanko, this time as a crooked stoner cop (different from the version he played in the first movie) who smokes the evidence through some vaporizing gun device. His bumbling cohorts, Noodles and Drooler, provide some laughs in certain scenes. Somehow Jimmy the Genius’ marijuana turns people or animals who smoke it into lizards.

Meanwhile, helicopters hover over and try to surveil the pot farm underneath the fake swimming pool. Some nude women distract the cops on a beach nearby while C& C flip them the bird as they steal Jimmy’s pot. By the way, I really like the music in this film and wish there was an official soundtrack like the first movie. I like the song that’s playing during this scene. And then Cheech pretends he’s swimming on top of the ladder because the tarp broke. Hahahaha.

Somehow this also blends into that early ’80s era of screwball comedy films such as Porky’s and Meatballs. Lots of sex humor, slapstick, and physical comedy going on. Somehow the plot isn’t that complex, but stays simple and loose throughout the movie. It does seem longer than the first movie and does get slow at certain parts, but it doesn’t take itself too seriously and people expecting a serious film will not get it. I mean it’s Cheech & Chong for crying out loud.

And then you have the scene in the Chinese Restaurant with Pee Wee Herman as the cocaine snorting Hamburger Dude and Evelyn Guerrero reprising her role as Donna from the previous movie. This time around she looks totally wasted and they go underneath the table for, errr, some nose candy. And then the Chinese waiter lifts up the table cloth and says: “No Lobstah, how about Squid?”

I can’t say too much more because I don’t want to spoil it for those who haven’t watched it yet. It’s recommended to view under the influence of certain substances but it’s also funny when you’re sober. A late night, early ’80s, screwball drug comedy that is definitely for a certain crowd. Definitely a cult classic.  Not as good as Up in Smoke but it’s up there. This CED skipped in a few parts too but mostly it was okay.

After watching that CED I also watched Still Smokin’ and Tron on CED and then my CED player went poop. It broke!!  I put a Clockwork Orange disc that I’d just gotten in there and somehow it broke the machine. It made a loud grating noise and rattled inside. It’s cool though; I just put in an order for another CED player that works better.  I am not reviewing the C&C trilogy in backwards order either. The Next Movie is for a later review.

HAVE A GOOD NIGHT AND A PLEASANT TOMORROW

Retro?
View all posts by Isabella Acuña →
Bookmark the permalink.