Stories From the Starlight 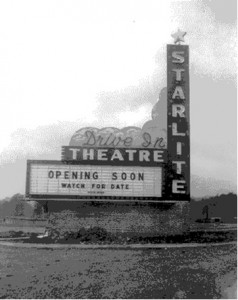 When my friends at R-Massive asked me if’n I wanted to write for their website one night after the late show was over, I only had one question for ‘em: “Now why in the Hell would you young pups want to deal with a 60-year-old drive-in theatre owner like myself?”

To which I replied: “You’re a gotdamned moron, you know that? I wasn’t sure if your momma had dropped you on your head before, but now I’ma certain.”

Well, after them boys annoyed my ass for the next month straight, I finally broke down and agreed to do it so, hope you like it.

I showed up here back in the late 1950s roundabout the time that The Starlight first opened. As a kid, I was gobstopped by how cool the place was so I spent every summer here ‘til I turned 16 and then I got a job workin’ as a counter boy. Worked here ever damn since. I got to be the manager round about ’81 or ‘82 and then I bought the place in ’91. Me and the wife live in the house next door.

But that’s not why the boys hired me for this here site now is it? So what I’ma gonna talk about tonight is movies made uppa clips from other movies. I’ve seen so many damn movies in my years here that I can tell at a glance when a film has parts in it that are lifted from a movie what played before. Now the first one I ever really noticed, and probably the most famous of alla these, is a picture called Battle Beyond the Sun. Crappy little movie, but damn if’n it doesn’t have some pretty good effects scenes. Hell, ole Roger Corman liked ‘em so much, he used ‘em in three or four movies. The one that pops into my head right now is this one —

This here movie not only uses effects from Battle, but it sneaks in a little bit from a Russian film as well! I mean, even as a teen, I knew something was fishy when I seen the Ruskies symbol on one of them there rockets. But this one was a fun little time-waster and it stayed pretty popular around here throughout the late ‘60s. Hell, my wife gave me my first, erm…kiss…during a screening of this picture (she’s standing over my shoulder as I write this and I don’t want to sleep on the couch tonight).

Now, the next one I can remember vividly was from the early 1980s and I only booked it on accounta the poster which the damn kids kept stealin’. I musta went through four of ‘em in a three week run, little bastards.

Bein’ the South, the audiences ate up these car crash movies like a baby eats candy. This one was made uppa footage taken from three different places; The Stuntmen series, Danger Freaks, and Gone in 60 Seconds (which was a classic ’round here). Filled with stunts, pretty women, some damn good rock music, and a whole lotta car crashes, this one was a big moneymaker for me.

I was one of the few who didn’t take the first one off the screen, and boy was the gate big for it! I ran it for about a month and made some insane amounts of cash with it, so when they announced a sequel, *whoo boy* you betcher ass I was booking it first week out! Then, on opening night, when folks realized they was just watching Part One again with a few new clips, holy shit was they angry! I hid in the projection booth that night and told the girls to lock up the snack bar. I even called the distributor and asked ‘em if they had sent me a fucked up print by mistake, but they said: “Nope, it’s supposed to be that way.” Well, I pulled it that first night, but I didn’t give no refunds on accounta everyone actin’ like assholes. Either way it was a crappy movie – 90% filler, 10% crap.

This last hey-yeah has the distinct pleasure of being the only cannibalized cannibal film of which I am aware.

This bad boy was the only one of its kind that I could get booked here. Of course, after learning about it, I discovered it was the only one you really needed. This flick uses scenes from Mountain of the Cannibal God, Last Cannibal World, Man from Deep River, and it’s even got the score from Cannibal Ferox. But it’s still damn good fun and if’n you’re a fan of them there gut munching movies, this’n ‘ill be yer cuppa grue.

Alright, them four are all you get for now. My wife and my bed are calling and the wife sounds pissed. Thanks for reading and LONG LIVE THE DRIVE-IN!!!

Billy Bob Elmore has run The Starlight Drive-in in Sweetwater, TN for over 30 years now and he loves the place like it was his kid. This is the first article he’s ever written.