Ramblings From a Semi-Deranged Mind #1

EPISODE ONE: YOU GOT SERBED 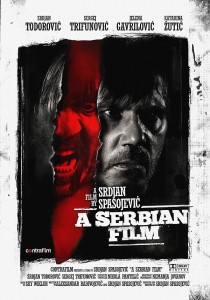 This is where all the blood and gore comes in as the filmmakers gleefully try to top themselves with each new scene. My favorite part is the bit where our hero refuses to continue with a serious S&M scene, but the girl he’s making it with bites him on the willie because he stops. I took that as an awesome statement on culpability: no matter how scared these girls look in their bondage scenes, make no mistake, they’re not being victimized or demoralized; they’re into it, either for the cash or the kicks.

There’s a notorious rape scene involving an infant, but it seems to be there for shock value and little else. Yes, it shows how hardcore these filmmakers are, but it plays out like a scene from one of Rob Black’s “extreme” low budget pornos. You can tell it’s faked (thankfully), but that only makes it feel more pointless. The last 20 minutes are so over-the-top that they venture into the realm of stupidity. After our hero blacks out for 3 days, he wakes up raping his son while his wife is being raped by his brother (who had previously been shown to have a sexual obsession with her).