Red Sparowes – At the Soundless Dawn 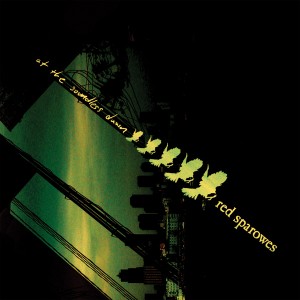 Take the quieter parts of Isis and Cult of Luna, mate them with Sonic Youth and Interpol, strip away almost all the vocals, then add a dash of frenetic explosiveness.  This is an approximation of “At the Soundless Dawn”.  Most people would preface their description of this band by mentioning some more well-known bands (Isis, Neurosis) and their relation to various Red Sparowes bandmembers, but this is a bit misleading.  Yes, there are elements that betray the origins of the authors, but for the most part this is an album that stands on its own.  “At the Soundless Dawn” is reflective and meandering, but doesn’t wallow in its own desperation for too long.  Unlike the almost exclusively quiet/loud dynamic approach used by most atmospheric metal bands of late, Red Sparowes also utilizes melancholy drama countered by hopeful reprieve to create the needed tension and resolution.  It’s a different approach to movement and I’m glad to see it materialize.  Instead of being crushed under a sonic assault, one is lifted and carried by the immense and epic wave of noise.  Dark and quiet themes stealthily undulate until the listener is caught unsuspecting, then writhe and explode into a grand audio upheaval.  There’s quite a bit of Sonic Youth-ish “happy daydream” guitars that morph out of ideas much more sinister.   This doesn’t mean that there aren’t any bludgeoning apocalyptic riffs, but they’ve been relegated to the margins.  But don’t let this fool you into thinking they’re a bunch of happy-go-lucky, what-me-worry? types.  I was starting to feel a bit warm and fuzzy by this release until the last few minutes of the last track.   How can such a simple drone be so terrifying?

1) Alone and Unaware, the Landscape was transformed in Front of Our Eyes
2) Buildings Began to Stretch Wide Across the Sky, and the Air Filled with a Reddish Glow
3) The Soundless Dawn Came Alive as Cities Began to Mark the Horizon
4) Mechanical Sounds Cascaded Though the City Walls and Everyone Reveled in Their Ignorance
5) A Brief Moment of Clarity Broke Through the Deafening Hum, but it was too Late
6) Our Happiest Days Slowly Began to Turn into Dust
7) The Sixth Extinction Crept Up Slowly, Like Sunlight Through the Shutters, as We Looked Back in Regret