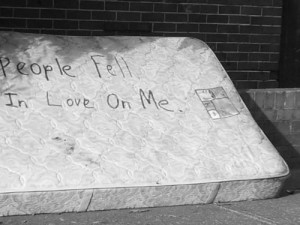 Bruce Frasier’s ex-wife Wendy came from Texas for a visit. She brought along her new husband, Miguel. Miguel was from Puerto Rico.

They drove from Austin to Brooklyn, New York, most of their journey along 95 North. They traveled by brand new, black, Mustang convertible. Wendy was a Veterinarian now and doing quite well for herself. Miguel was an artist with paintings hanging in several East Coast galleries. A recent issue of Art Forum had called him The New Picasso, The Mexican Picasso.

Along the way, they stopped at a flea market and bought an irresistible floor lamp with dark, taloned claws for the base and a blood-red, dragon print adorning the shade. Propping the lamp against the floorboards of the tiny car’s backseat made pulling the roof over impossible. The next day, it rained. All day. The inside of The Mustang got wet. Everything they had packed got wet. They got wet.

Wendy said: “Do you need any help in there?” and snaked her neck towards the kitchen.

Bruce’s girlfriend, Laura was making Dinner for all of them. She did not reply. She wasn’t being rude, she just didn’t need the help.

Wendy turned back to the men. She said: “How’s the writing business, Bruce?”

Bruce said: “Filthy. Unloving,” then he said: “Atlas Publishing just gave me an advance on my next three books.” Wendy nodded.

Bruce reached behind him and picked up a marble-faced composition notebook. He flipped a few pages in and read aloud: “Young lovers race down a side street, in love. The moon plays streaming games across their hair. Pocket change makes a noise like combination lock release on the chain that keeps the junkyard safe after moonrise. Chink-clink, chink-clink, repeated indefinitely like the pealing of a church bell, Sunday morning incessant.”

“Brooks is alone in a tastefully decorated room, candle-lit with a dark rug over darker wood. Tassel fringe flipped up on itself like beached eels, but still elegant, describes the edge of the throw. He is listening to something heavy on the radio. Brooks was once a young lover himself.”

Miguel took a shot of the Scotch, smacked his lips and said: “It’s nice.”

Wendy said: “Wow, Bruce,” and then lit a cigarette with a slight smile.

Laura appeared in the doorway between the kitchen and the dining room. It was the only frame in the apartment that wasn’t hung. Bruce had once held a blanket there as Laura ran around closing doors and opening windows in an effort to direct a bat out of their lives, back into the night. The bat in question had awakened Bruce to find Laura already upright at four A.M. She was listening intently to the creature’s faint squeaking; a sound which she had come to believe was the refrigerator’s death rasp.

The women were doing the dishes. Wendy was washing, Laura was drying. The air was sharp with silverware against glass, the smell of lemons.

Miguel and Bruce went out for a drive. There had been more beer with dinner and Bruce was feeling it. His thoughts were a slow crawl through the alcohol pool which had replaced his brain. They hit the Brooklyn/Queens expressway and headed out towards Long Island. Miguel reached into his pocket and produced a joint.

Bruce hadn’t in years but said: “Yeah,” with a shrug. Miguel reached into another pocket and came up with a lighter. They cruised along under the streetlights, passing the pot back and forth. Bruce’s stomach was burning with beer, and scotch, and Laura’s awful cooking.

In the passenger’s seat, Miguel pulled his ankles up, crossed his legs, and sat Indian style. Bruce thought briefly about Miguel’s rain-wet shoes staining his upholstery, but the thought quickly drifted away. Miguel looked big in Bruce’s clothes, and Bruce couldn’t help but think that it somehow made him look dim-witted. When he spoke, however, Bruce thought he was more eloquent and graceful than any poem.

Miguel asked: “Do you love Laura?”

Miguel said: “What about Wendy?”

Bruce hesitated, said: “I thought so at the time,” then he said: “But time…”

They could see the ocean now. Waves crashed the shore. The moon played leapfrog games across the rippling surface of the water. Bruce pulled a handkerchief from an inside pocket and blew his nose.

Miguel said: “She still loves you.” The words hung in the air like fog. He said: “Nothing I paint for her could ever equal the power of your words.”

Bruce said: “Do you have any more of that pot?” They smoked another joint.

Some more time passed. Miguel said: “Do you have a mother?”

Bruce said: “She died when I was young.”

Bruce said: “I still miss her, even though I don’t really remember her.”

Miguel said: “It’s like you’ve had to invent this personality for her, right? You had to create something for you to miss.”

“Exactly. And then my father and I never got along.”

Miguel said: “I killed my father,” and then rolled down his window. The ocean air came at them from the East, eventual sunrise. Bruce thought about laughing, but didn’t.

A little later, Miguel started to laugh. It was a low, wet sound like choking on saltines. Bruce was unsure how to react. He thought, we should go back, and they did.

They were outside the apartment and Bruce looked through the front window to see Laura rip a clean, white sheet across the half-nude and sleeping body of his ex-wife. Miguel saw this, too.

He said: “Your wife loves us all. Probably more than we deserve.” After a moment he said: “You should take a lesson. Your poetry is beautiful, but your heart is sad.” He turned his back and went inside.

Bruce stood on the sidewalk facing east, hoping for sunrise at two A.M. The moon watched him; hidden sun illuminating craters and making it look like a bowling ball. Through the walls, he heard Miguel thank Laura for dinner, her hospitality.

Bruce turned back to the window. Miguel slid out of his pants and into bed with Wendy. The lights went out.

Nathan Bradford is a writer, philosopher, and film critic who divides his time between Bangor, Maine and Brooklyn, New York. Some of his earliest writings can be found in the R-Massive Zine Archive.