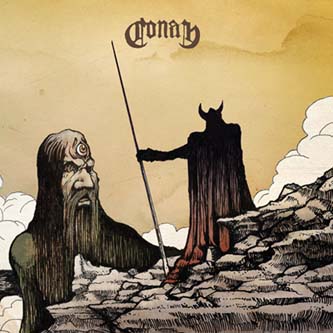 Conan have done it again!

Two years after their debut Horseback Battle Hammer [review], and only one year since their split with Slomatics, Conan have returned with a six-song pummeling that leaves any remaining detractors trembling with fear and begging for mercy. But no quarter will be granted by these kings of doom; all will be slain by Conan’s conquering hand.

Monnos opens with the wickedly titled Hawk as Weapon (how barbarian!) which contains all the hallmarks of sludgy goodness that Conan is known for. Stomping drums and a wash of cymbals support mid-tempo mammoth riffage while those patent pending quarter-note / half-note bellowing vocals resound. The vocals get more guttural and agonized towards the end of the track which adds the perfect punctuation to this gem of a kickstarter. But who would expect any less from these UK based worshipers of Crom?

And so the bodies fall in similar blood-spurting fashion until song number four, entitled Golden Axe, where Conan take a divergent path into more ambient territory. The vocals drop out and shifting, mutating tribal drums bash away under a simple repeating guitar line while, lamentably, little else happens. The song is cool as an interlude, and it certainly serves a purpose, but it could have been shorter. Other people have chosen this song as a highlight of the album, so maybe I’m wrong here.

The last two tracks are mostly a return to form, but the funky hi-hat work in Headless Hunter made my ears perk up. The cymbal work in that song, like the splash accents, really added some spice to things. It was a refreshing change of pace, yet didn’t detract from the cohesiveness of the album at all. Which is something I’d like to highlight, as this is available on vinyl and many people will be listening to Monnos in its entirety in a single sitting. This album actually is an album, meaning that all the songs flow into one another in a way that makes sense and aren’t just a nonsensical blob of tunes pasted together. Some songs are actually crossfaded into one another, so this is an issue the band was obviously concerned with. Mission accomplished gentlemen (or is that savages?)

The ultra bass heavy production of Horseback Battle Hammer was something that bothered me a little bit, so it’s nice to see that Monnos was toned down slightly in that department while still managing to retain a nice low rumble. Another nice new touch is the increased prominence of dual-vocals. There’s a lot of subtle and not-so-subtle layering of vocals on this album, but it was done in a way that retains the feel of their earlier work while also building upon it.

I don’t think anyone could have asked for a better follow-up to Conan’s debut. These guys have really delivered with an elephantine slab of doom / sludge here, so don’t hesitate to pick this up from Burning World.

I’m going to make a little personal suggestion that Conan name their next album No Fear of Magic because these Cimmerian brutes cower before no man, wizard or otherwise.

Listen to a live version of Hawk as Weapon below: