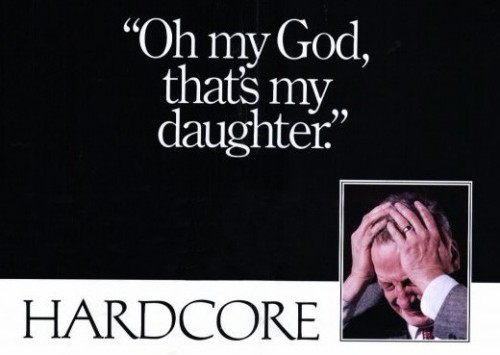 This is a gritty, sleazy film featuring George C. Scott as Jake VanDorn, a religious and naive midwesterner who has to dance with the devil in order to save his teen daughter from the clutches of the West Coast adult-entertainment industry.

This is a pretty strong movie, even by today’s standards, but Hardcore doesn’t start building momentum until about 24 minutes in, so if you lack an attention span you may write it off too quickly. With a title like Hardcore, you might expect lots of action from the onset, but just like the primal acts it portrays, it starts off coolly and ends with a climax.

We begin in Grand Rapids, Michigan, a quiet city with a slow pace of life; a land of church organs and hymnals. The kind of place where front doors are unlocked, children are left to play unsupervised, families gather around the kitchen table for dinner, and neighbor greets neighbor without the distracting neon of the big city. This sterile drabness is essential for setting up the motivation of the characters, and provides the contrast for the shock VanDorn is exposed to; a collision of cultures and morals.

This collision is realized as soon as VanDorn’s daughter goes missing. Like most concerned parents would do, he contacts the police, who ultimately don’t do much of anything. The police then prompt him to hire a private investigator, who, in turn, proves to be ineffectual and unreliable. It then becomes time for VanDorn to get his hands dirty and personally immerse himself into the kingdom of smut. As seedy, slimy, dirty, and gross as he’s gotta be. Man to man. Scumbag to scumbag.

When the pulsating synthesizer score comes lurching in, then you know it’s on.

Parallels abound with Joel Schumacher’s 8MM, as they explore similar themes and have a similar plot, but I don’t think 8MM is simply a modernized remake. They’re not really interchangeable, but they compliment each other, so if you’ve seen one, it’s not a waste of time to see the other. 8MM is more about the source of demons within people, what makes monsters tick, and the nature of evil in man, while Hardcore is about the mechanisms of salvation.

The 1956 Western film, The Searchers, is another movie that Hardcore has been thematically compared to, as it contains a voyage into enemy domain, a land of foreign darkness, to rescue someone that may or may not even want to be saved at all. Like Hardcore, it asks the question: How far would you go to save someone you love?

A good movie to watch for simple sleaze value, but also has a depth that lends itself to analysis and dissection. It can be primal or cerebral, decadent or moral, hopeful or despairing depending on how you look at it.